On 23 March 2022, the Japan Plant Factory Association (JPFA) and RAI GreenTech Exhibition organized a webinar on “Globalization of horticultural technology & innovative indoor plant production systems”. Co-hosted by the Netherlands Embassy in Tokyo and in collaboration of leading scientists on this topic, the webinar highlighted the recent developments and opportunities in the rapidly globalizing market of horticultural technology.

The webinar was organized in response to the interest by Japanese horticultural/plant factory companies in becoming more active internationally and getting better informed of global trends among operators and technology providers. It was the first event co-organized by JPFA and RAI Amsterdam since the partners signed a MOU on cooperation on 16 February 2022. 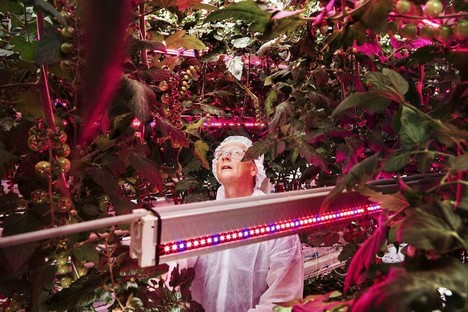 The webinar featured four presentations followed by a Q&A session. As a keynote speaker, Agricultural Counsellor Ms. Denise Lutz presented trends and developments in the Dutch horticulture and starting materials sector, and underlined the opportunities for collaboration to address global challenges through innovations. Ms. Eri Hayashi, Vice President of the JPFA, highlighted plant factory and horticultural innovations in Japan, by introducing some of the latest applied/demonstration research through academia-industry collaboration carried out at Chiba University Kashiwanoha Campus, a plant factory hub in Japan.

Ms. Mariska Dreschler, Director Horticulture RAI Amsterdam, presented GreenTech as a global trade platform watching for trends in tech-driven horticulture. She was joined by Mr. Edwin Vanlaerhoven, Business Development Director Certhon/Denso who is working on innovations in both greenhouse horticulture and vertical farming. Dr. Luuk Graamans of Wageningen University and Research discussed the global feasibility of vertical farming based on relative electricity use efficiency and water scarcity, and shared the latest research on crops, measurements and models that are useful for realizing autonomous production in the future.

NHK TV program “Reiwa Net Ron” about digital transformation
On 20 March 2022, Japan Broadcasting Corporation (NHK) aired a TV program called “Reiwa Net Ron”, in which a panel of celebrities discussed how businesses and services can transform themselves through digitalization. Although the term “digital transformation” or “DX” has been popular for the past years, and both the public and private sectors of Japan seem to be working hard on transforming themselves, Japan still ranks low (28th) in the world digital competitiveness ranking*. The program looked into successful initiatives outside Japan that are considered to be exemplary. Smart agriculture in the Netherlands was presented as a model for digital transformation of the agricultural sector. The footage was provided by Van der Hoeven Horticultural projects, Certhon and Bom Group. Digital technologies offer the potential to revolutionize Japan’s agriculture which faces a labor shortage and a rapidly aging workforce, but this is not happening easily.

Key take away was the dual need for a sense of urgency and for accepting failure in order to advance. The program made clear that a hitherto lacking general sense of urgency is an important cause for Japan arriving relatively late at innovation: Japan has simply been too comfortable for too long and had become complacent, focusing more on the production of things (hard ware) than on services (software), and thereby failed to recognize the enormous potential of smart phones. Now the sense of urgency, if only to be left behind and miss out on economic development, has finally arrived. Perhaps in particular in agriculture.

In regard to the need for accepting failure, there truly can be no innovation without taking risks, without making mistakes. The program was concluded with remarks that Japan needs a culture that accepts failure and encourages people to take on new challenges.

Ministry of agriculture, nature and food quality of the Netherlands
www.government.nl/en