“I believe we’re always too late in finding a solution to a problem," Yang Sen Matey, Founder of Mirroryasai, an agtech company based in India. The Arunachal Pradesh state, home to Mirroryasai, consists of 80% forest and is developing at a fast rate due to which forests are being converted to agricultural land and infrastructure, explains Yang.

“Now I want to introduce indoor hydroponics, as it is new to the state. Therefore, I want to bring the solution before a problem occurs in the state, by spreading the message of vertical farming benefits where we can use the already available space and save our forest to ourselves."

Lettuce as a niche product
Yang says that they will first start producing lettuces as that’s a niche product in the region. “The market is rising slowly, as well as our operations as we have to see what product demand there is. Restaurants don’t have access to lettuces, which makes it a high-value product for them. Therefore, we'll be specializing our growing recipes for exotic lettuces and other greens to meet demand.”

After the initial harvest, the company tried selling off produce B2C, however, that demand was very unstable and unpredictable. Soon that pivoted into a B2B focus, where stable demand comes in. Mirroryasai got to know more restaurants around the area which were very interesting and that now resulted in a growing stable demand.

Yang at the beginning of his project

Pilot farm ready for expansion
Yang started doing research on sustainable farming after he finished his studies. Then he got a bit more involved with aquaponics through a three-month online course which got things rolling. After moving back to his home state, in 2021 January Yang set up a 18m2 hydroponic farm, funded by his parents where he started experimenting with several crops. As the farm is still in a pilot stage and not yet at size, it counts a humble 18m2 growing space.

This summer, Mirroryasai is scheduling a 100m2 farm expansion, with 2500 plants scheduled. Later on, they’re hoping to reach a total amount of 10,000 plants. After being asked the meaning of Mirroryasai, Yang explains that it stands for Mirror Greens, as Yasai is Japanese for Vegetables. The Mirror stands for the reflective quality that can be seen through all products. As of now, Mirroryasai has been running trials with strawberries, basil, mizuna, kale, herbs and some lettuce varieties. 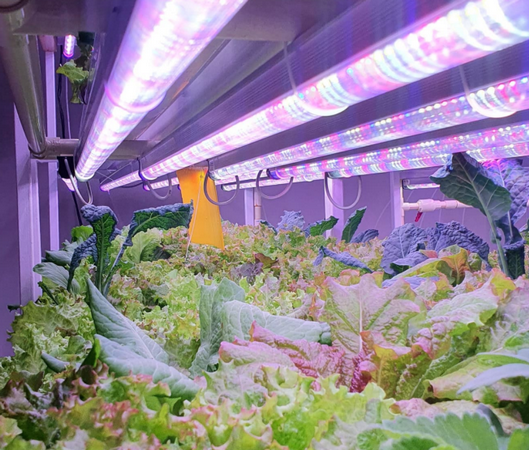 At this point, the farm only comprises two employees that run the farm. The entire system is designed by Yang, and has been trialed for the past six to seven months. As Yang explains, the Eastern part of India can make use of subsidized energy, coming at prices of 0.040 USD per watt for Yang’s facility.

However, if they were to move to another metropolitan city in India, in the South for instance, prices would be much higher. That’s why they are planning to make use of hydro power for the new facility as that’s allowing them to be more secure with sustainable energy.

“In the past five to six months we’ve been figuring out the system, how it works and getting revenue streams in. There’s so much to sustain the farm and keep it working. If we’re going commercial we’ll be able to supply more parts of the state which helps revenue to increase. Now more people are getting familiar with indoor farming, demand is increasing as well,” says Yang.

Yang is expecting lettuce to become even more popular as now most restaurants are using cabbage in their dishes. As Mirroryasai is spreading more awareness, they’re expecting to easily access more restaurants throughout the region as they’re mostly using cabbage now.

A sustainable hub
The main goal for Yang is to create a sustainable hub, forming a community that provides a variety of crops in a local shop. Through the hub, the aim is to connect farmers and teach them the sustainable way of farming to create an ecosystem.

“Our state is most dependent on other states as it’s difficult to get fresh produce in. Farmers aren’t aware of predicted farming yet, so it’s a great opening to introduce vertical farming that can help supply stable produce. Along with the seasonal vegetables, we will be able to balance everything out.”