Is aeroponics better than hydroponics?

Aeroponics and hydroponics are both methods of growing food without soil. Historically, hydroponics has been more commonly used for irrigation both in commercial and domestic setups, since aeroponics involves much newer technology and greater expertise. Both systems provide the nutrients usually accessed by the plant through soil by adding them to a water solution - how this solution is delivered to the plant roots is where the two systems differ.

Looking to build an indoor farm or greenhouse? In this blog, LettusGrow explain the main differences between hydroponics and aeroponics, whilst also exploring the benefits and disadvantages of both systems. 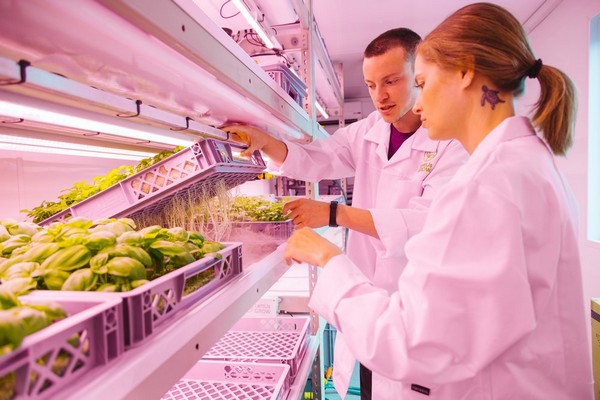 Liquid vs mist
In a hydroponic system, plant roots are submerged into a body of nutrient-rich water. However, there is the possibility that roots can become water-logged and oxygen deprived - just as overwatering a house plant can drown it. Growing crops in waterlogged soils can also result in lower yields.

In aeroponics, plant roots are instead suspended in air and irrigated with a nutrient-dense mist. This mimics the natural air pockets in a healthy soil system and increases the plant’s access to oxygen and other atmospheric gases. This can boost the plant’s root health and rate of growth, with significant yield improvements observed across a range of crops.

It’s also worth noting that aeroponics can use far less water - up to 30% less than hydroponics and 95% less than outdoor farming due to there being less evaporation from growing media mounted within the system and a lower volume of water required overall. It also doesn’t require Rockwool, the fibrous insulation that many systems use, which is tricky to handle safely, reuse and recycle energy efficiently.

Pests & disease
There are other benefits to the well-aerated root zone you’ll find in an aeroponic system. Plant roots are suspended in air and the mist is applied directly to them. This keeps the growing media dry, which means plants are less prone to infections or mold. Using UV sterilization and filtration within the water recapture and reuse process also ensures that the chance of pests or disease outbreaks is at a minimum.

In a hydroponic system, the matting and beds are more difficult to keep clean, since water will saturate through the growing media in order to irrigate the roots. The combination of water plus artificial light increases the chances of algae growth on the hydroponic beds, which can bloom uncontrollably at times.

Precision irrigation
In an aeroponic system, irrigation can be controlled on a crop by crop basis. Unlike saturating the crops by flooding with water, mist can be administered in very precise amounts and for specific periods of time, which gives a higher level of control than you would find in a hydroponic system. This is because in hydroponics, plant roots are submerged in large bodies of water that cannot be manipulated as readily.

In aeroponics, water, nutrient levels and gas exchange provided to crops can be tailored bed by bed - meaning you can change what is being given to the plants based on their individual requirements and adjusted depending on the plant’s developmental stage.

The cost of growing
One of the biggest benefits to a hydroponic system is that it is simpler to use and build your own system. It’s for this reason that it is often found in grow-at-home kits, or lower cost, lower output horticultural facilities. Since there are no extra components needed to generate mist, the amount of energy used and the capital cost of a hydroponic system is also lower in absolute terms.

In most aeroponic systems, nozzles are used to create mist - these can often clog and break. This is the reason they have not been as widely adopted as you might expect, considering the yield benefits they offer. In response, LettUs Grow have designed a unique nozzle-less system which simplifies the traditional aeroponic systems and reduces maintenance.

Aeroponic systems can be far more profitable due to their higher productivity speeding up your growth cycles: faster growth reduces your labor and energy consumption per kg, therefore is financially more efficient. However, both aeroponic and hydroponic systems require business modeling to ensure the crops you are intending to grow are economically viable within your market. Within vertical farming, crops with a higher price point, such as microgreens and herbs, would need to be grown in either system to gain a high-profit margin, whereas larger crops such as tomatoes or strawberries are profitable in greenhouses.

Aeroponics vs hydroponics
Deciding whether to choose an aeroponic or hydroponic system depends on what you intend to grow, the price of your produce, and your chosen market. However, as aeroponics provides crops with much stronger and healthier root systems it has a much higher potential performance than a standard hydroponic system. Hydroponic systems can be simpler and cheaper to install but less profitable overall after your first year or so of growing, so whilst this might suit certain systems, aeroponics offers far more benefits to a larger scale, commercial growers - from container farms to greenhouses.