“It all went really fast, and we didn’t even know what our goals were. During a period of 3 weeks during intensive business analysis sessions, we realized that aquaponics couldn’t be financially sustainable for us and that the lettuce we were growing just wouldn’t make us competitive, especially considering the investment needed to scale the business” says Martin Vogelbaum, co-founder of MyGreens. That was when they decided to turn to microgreens and hydroponics.

Martin Vogelbaum and Allan Garnier were both working in the tech sector for multinational company Oracle when they got intrigued by vertical farming. That curiosity led them to build an Aquaponic farm, and for three years they juggled between their full-time job and their Aquaponic farm.

B2B via e-commerce
When they pivoted to a new business model based on pure hydroponics and microgreens, they started working directly with the high-end commercial sector, such as Michelin-starred restaurants.

Martin notes that a lot of microgreen producers in the region had gone out of business during the Covid lockdowns, or because the quality of their microgreens was simply not up to scratch. But the quality of MyGreens products has kept them afloat, especially because they target the high-end sector. “It’s been quite a ride,” says Allan. “We started selling to a local Michelin-starred restaurant, as well as other locations. This got us to a point where we needed to expand, so we started looking for distributors. Now, we have two distributors in the region, serving even more restaurants.”

MyGreens is now looking to expand into other regions in Spain, and a new farm will be necessary soon. “We got a seed round of 140,000 euros to fund the expansion,” Martin points out. 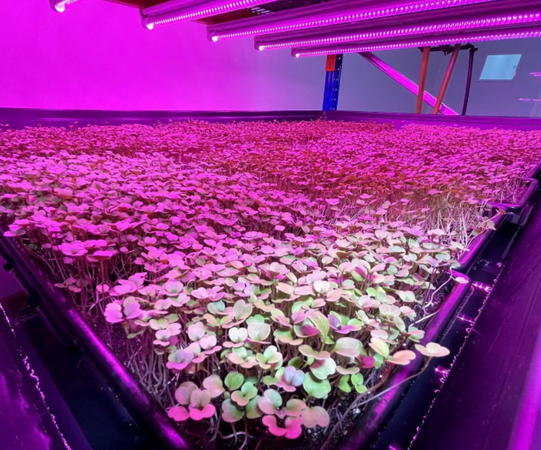 Sustainability as a first
Currently, MyGreens is growing a wide range of microgreens such as many different varieties of kohlrabi, kale, and arugula. Most interestingly though, MyGreens’ service is subscription-based. “There are different subscription models, where customers get our fresh microgreens delivered directly to their home on a weekly basis,” they explain.

Obviously, their care for sustainability doesn’t stop at cultivation practices, as the plastic containers their microgreens come in are reusable, and My Greens collects them from their customers and washes and sterilizes them before re-use. At the same time, they are now offering plastic-free containers, made out of corn starch and plant cellulose, making their greens containers fully biodegradable.

Expanding the product offer
The wide offering of MyGreens surely came with its own set of challenges, says Martin, especially because he initially wanted to grow some 200 varieties in their vertical hydroponic farm. “We have now reduced that to 40,” he chuckles.

“At the same time, we are also testing new varieties and see to what extent we can grow them together with our usual crops. Growing different varieties at once can be very tricky, but if you can solve the difficulties, your customers will appreciate a wider choice of fresh greens that are delivered directly at their door.”