KG Systems is known for its rolling tables and container systems, but about two or three years ago, they saw increasing demand for multi-layer grow racks. "It's really just simple tables in a rack, stacked in layers," Matthias Haakman of KG Systems explains. "We then made a few of those and got more and more demand for those racks from the North American market."

Library
Those racks in the US were based on a sort of library system, Matthias says. "With a handwheel, and if you turn it, the whole rack starts moving. We already had that principle in our rolling tables. The advantage is that you don't need a path everywhere in between tables, which increases your acreage by 20 percent." 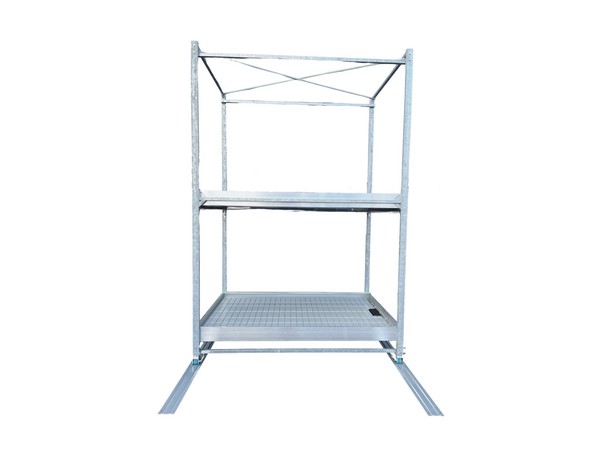 In America, there was increasing demand to make racks with the same principle. "So I did a bit of research in the field, and I found out that the market was a lot bigger than I initially thought. It turned out to be an interesting market for us, and we got started: we developed an entirely new rack from scratch."

The decision was made not to follow the principle of the library system, as it was used in existing grow racks in the market. "Otherwise, you end up in a race to the bottom – we wanted to offer a product that was different than what was already in the market."

The first project is already under construction in the US. Two more projects have been sold in that country, in addition to one in Portugal. 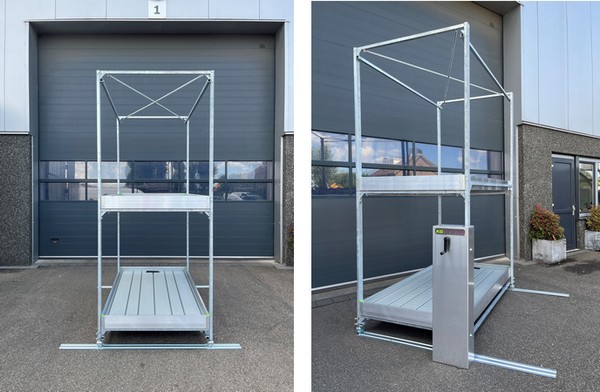 No handwheel necessary
The racks supplied by KG Systems are light enough to move manually. "Therefore, they don't have a handwheel, which saves the grower unnecessary costs. If the grower wants, there's also a possibility to build in a mechanism with a handwheel." The wheels underneath the racks are made of hard plastic, which runs on steel rails. "One person can move a rack. That's the thought behind it."

Without crossbars
"The unique thing about our racks is that, unlike existing racks, it doesn't have a crossbar in every section or between the crops. We have made the racks rigid in a different way. Because we have placed the posts on the outside of the frame, it is possible for the bottoms to run all the way from front to back, so you can have crops everywhere, even in places where normally a crossbar would be. What's more, you only need a drain on one end of your rack, so not at every post or crossbar."

Twenty meters
That means that the bottom on which you grow becomes a lot longer, although there is a limit: "You can't go much further than twenty meters. With ten meters and more, we advise to include a handwheel, especially when you have multiple layers."

KG Systems' vertical grow racks are available in different widths, from 60 cm to 2 meters wide. Regarding the materials, Matthias says: "The frame is made of steel, the horizontal parts are made of aluminum, with a plastic bottom."

Horticultural glasses
The KG Systems grow racks were developed wearing 'horticultural glasses,' Matthias says. "For example, we don't use antibacterial coating because that doesn't really work anyway. We could powder-coat the racks, but we deliberately don't do that because they can get damaged, the coating can come off, leading to corrosion."

Instead, they galvanize the frame. "That makes it very easy to clean. We've had solid experience with that for years in horticulture. Powder coating, on the other hand, is more expensive and offers no added value." Yet, for clients who want this, we can also offer a powder-coated frame.

Easy-fix
The racks can be used by cannabis growers and in vertical farms, particularly in smaller-scale projects. "We offer those growers a very robust product that isn't over-engineered. The unique thing is that they can be produced in any length and width. We also produce fixed racks without wheels, if the client wants that."

And as with other KG Systems products, the Easy-Fix principle applies. "Growers want to buy a system but build it themselves. We can supply the racks as a sort of construction kit with very clear instructions, so the grower can build or assemble the system themselves, making it more interesting in terms of costs."