Breaking down the numbers of energy consumption of the ModuleX

Recently, many publications were released in the media about the energy consumption of indoor farms. Much data on energy consumption was published in the 2021 Global CEA Consensus report. Analysis of this data showed that Urban Crop Solutions (UCS) scores far below the reported figures on energy consumption. The figures UCS reports are read from the commercial systems that are operational in Belgium and Scandinavia.

Urban Crop Solutions has been researching plants and their corresponding ideal recipes for years. However, other factors are just as crucial to having a successful operation, such as energy efficiency. Recently, two of its customers (commercial growth companies) exceeded their expectations in terms of energy consumption by a large margin.

Equipped with automation
Jean-Pierre Coene, CEO of UCS notes that “The bench carousel, is an additional specification that other companies with static growth systems do not have. Our climate control systems and the advanced lamp technology mean that we simply need less energy. Just recently, we were challenged by a potential customer who wanted us to use his growth lamps in the systems for him. After extensive testing, it quickly became apparent that our developed lamps are much more energy efficient and that there is less failure after intensive use. ‘Measuring is knowing’ has always been our motto and therefore we dare to say that our systems are developed very sustainably.” 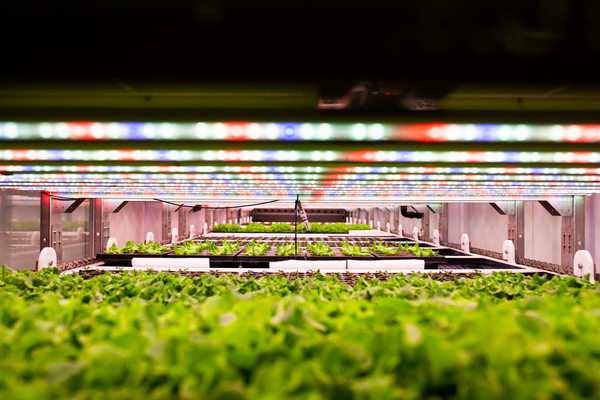 The first points to emerge are water, CO2 and electricity. With regards to water, it is clear that vertical farming offers a great advantage in water consumption through recycling the water and re-using the water from dehumidification processes. Electricity on the other hand is a different story. Numerous elements have an impact on this significant element in operational costs. Besides lighting, climate (cooling, heating, lighting, and the control of the %RH) is the main consumer, outweighing irrigation, and automation by far. Urban Crop Solutions has therefore conducted an in-depth study on all these key items.

"’Data is Science’ – this is the first step in such a process!" says Jean-Pierre, who has a background in engineering. Adding that “without sufficiently detailed measurements, you can never put your finger on the problem."

Urban Crop Solutions equipped a growing module with about 30 sensors and a separate registration system to record all the figures. Ranging from dehumidification data to micro-climates, the insights were translated into a proprietary design to control heating, cooling, and dehumidification at the right ventilation rate. This was a real breakthrough for smaller spaces with a very high cultivation surface, where all these techniques are contained in one climate module. 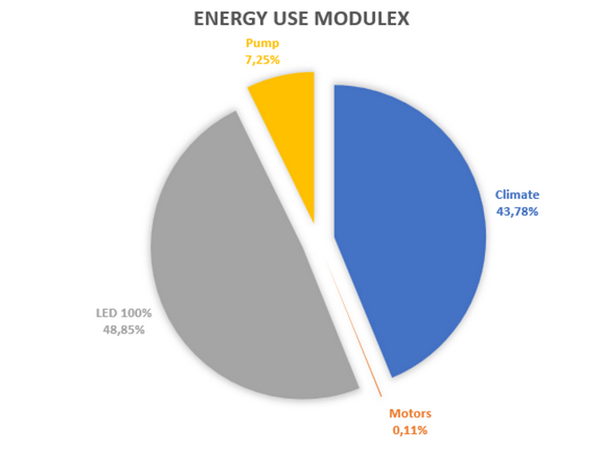 Diving into some of the numbers for ModuleX
UCS worked on four different energy consumers within ModuleX. A carousel system was chosen compared to previous systems, requiring additional motors. Furthermore, the maximum harvest surface was used within a 40" module, resulting in 86m2 inside space of 85m3. The LED technology was considered in great detail without sacrificing quality, power, and spectrum. As well as new approaches to the irrigation and fertigation mixing strategy.

By collecting data from their clients, Urban Crop Solutions have been able to cross-compare the inputs and outputs of two ModuleX solutions, used for commercial purposes in different locations. And the results didn’t lie. With a total of 86 m² of harvest surface and an average daily consumption of 279 and 268kWh over a 24-hour period, expectations were exceeded. 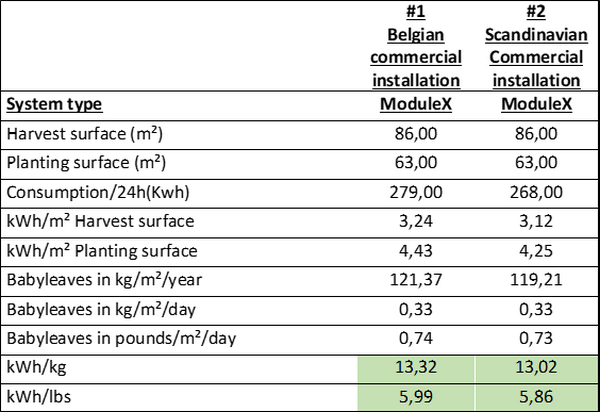 “Thus it can be noted that the consumption throughout the year, during all four seasons, was very similar. Owing to the "smart" climate unit, there was no substantial difference in consumption during the summer and winter periods. Allowing us to conclude that the ModuleX has the best results in the market of automated systems,” said Jean-Pierre.

With the results obtained from this preconceived challenge, Urban Crop Solutions aims now to go one step further in its journey for sustainability. The first step is to make indoor farms CO2 negative through the capture of carbon dioxide from the outside air and to insert this into their growing modules. The next step in improved circularity is by combining indoor farms with biogas installations in a project coined “Food-Waste-Food”. The growth unit will be fed energetically 100% by this biogas installation, and their clients will be able to reap the rewards obtained from the fermentation of food.