Not too far from the skyscrapers, yellow cabs, and coffee shops of NYC, a 30-minute drive out of the city brings us to Westfield, NJ. A classic turn of the century Victorian train station town, Westfield really wants to preserve its old buildings, such as the city theater, historic buildings and houses, and so on. ½ mile from Westfield's city center, there is a large construction project going on at 610 North Avenue East, a former commercial laundry facility and manufacturing building that is now being turned into a good purpose for the community.

"We are introducing a new concept that brings a different level of healthy food to the community says Michele Modestino, co-founder of Redi-Farms. "Grown locally indoors, all year long, the public will be able to purchase the product directly at the farm. We will also have an on-site restaurant and education components to help citizens understand the benefits of eating local and mostly plant-based." 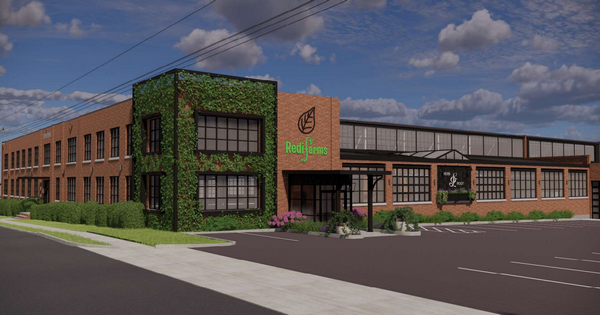 Community focus
Michele Modestino and Gregory Redington, founders of Redi-Farms, are set to change the local food environment and have big plans for the Westfield community. At this stage, the farm is still developing its proprietary growing systems in a temporary location but will soon expand into its larger facility. They are set to turn the 32,000 square feet former Handler Building located at 610 North Avenue East into a facility housing 6 businesses, all related to the indoor hydroponic vertical farm. In addition to the 13,000 sq. ft. (1300m2) farm, there will be a high-end plant-based restaurant with a large glass-roofed atrium and windows into the farm, an event space for up to 80 people, a farm store offering Redi-farms produce as well as other locally produced healthy products, a teaching kitchen, and classroom area that allows for the education of children.

Solar panels on the roof will allow the farm to cultivate green through renewables. In the next three months, the farm will move into a 4000 sq. ft. space within the building, with the rest of the farm as well as all the other uses will be opened by mid-2023. 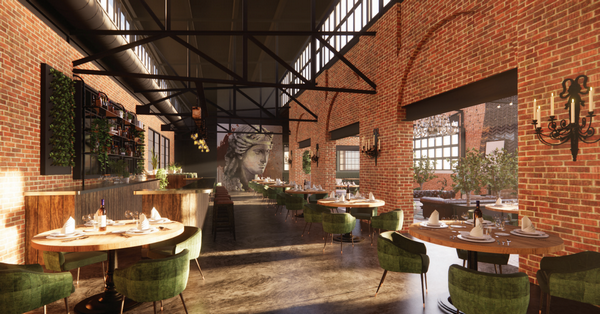 A render of the plant-based restaurant (Credits: REDCOM)

Set for a change
REDCOM, a design and construction company that Michele and Gregory own, is working to transform this idea into a reality. The couple isn't opposed to renovating old buildings as this will be one of the many other buildings they've turned into beautiful places, whereas they'd always aimed to maintain the building's original charm.

It's not just something they've started because of the latest fad. Michele has been a vegan for the past 2 years and vegetarian for 30 years before that. Greg is also a vegetarian now. Since the pandemic, when the supermarkets lacked fresh produce, they decided they wanted to grow their own food. Having lived in Italy for quite some time, they were accustomed to the availability and freshness of produce at local farm stands throughout Europe. Quickly, the couple developed an interest in finding a solution to supply everyone with local hydroponically grown produce.

Once their ambition was set out to start a vertical farm that would really add value to the community, Sean was hired as Redi's Farm Operations Director 16 months ago. Currently, they have 10 full-time employees. 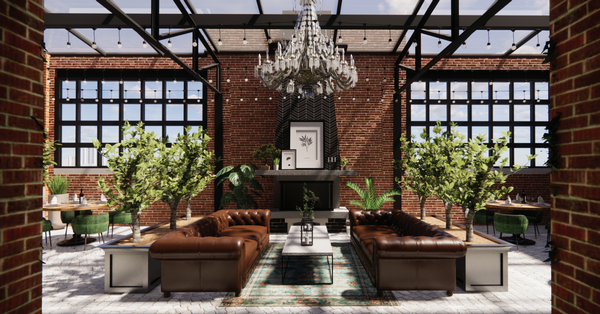 A glimpse of the restaurant atrium (Credits: REDCOM)

Fruitful results
After experimenting with various growing systems, the team preferred creating a self-made system as they couldn't find an existing one to suit their needs. They have developed a number of proprietary patent-pending systems that are very close to being ready for full-scale production at their 32,000-square feet building.

Up until now, Redi-Farms has been experimenting with eggplant, tomatoes, okra, stevia, baby leaf, spring mixes, a full arrangement of herbs and spices, cucumbers, various herbs, strawberries, mushrooms, peppers, artichokes, radish, microgreens, and several kinds of lettuces. These will all be grown in the new farm as well.

During the research and development stages, most of the product has been given away to non-profits such as local food banks and restaurants. However, after a successful showing at Westfield's farmers market recently, local consumers have also had an opportunity to purchase Redi-farm's produce and are very excited to hear about what's to come for the Westfield community. 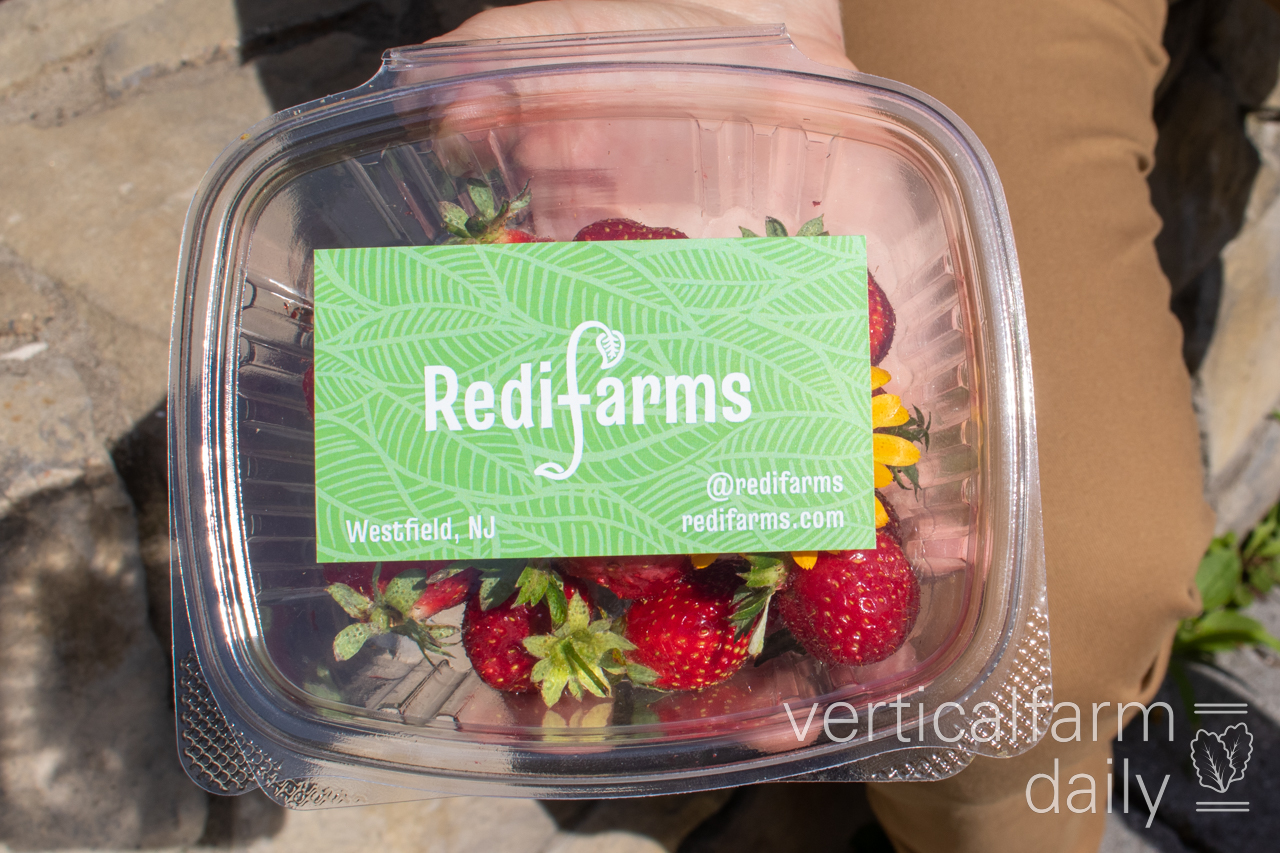 Strawberries harvested from the farm and ready for sale

"It's a place where people can go shopping, eat, learn, or work. If they go there for one of those four reasons, they'll automatically be introduced to all of the others. Common sense sustainability is what we want to introduce to our community. We want everyone to enjoy access to our fresh, healthy produce all year round, but we also want to educate them about how a plant-based diet can taste delicious and is not only good for your personal health but also for the health of the planet. We are also making a global impact by renovating older, underutilized buildings and reducing the amount of waste in society." Michele notes.

Eventually, the company wants to diversify into as many products as possible. They want to be growing most of the food that the Restaurant will need. They will also be selling it retail at the on-site store as well as wholesale to local restaurants, markets, and CSA's. With partnerships with the Rutgers School of Agriculture, Kean University, and other local universities, Redi-Farms is helping push research for indoor hydroponic vertical farming into more seasonal and flowering crops to help bridge the gap between conventional land farming and indoor vertical farming.

Keeping it simple
Currently, Redi Farms is self-funded by Michele and Greg, so there's no external pressure, which allows them to keep things in their own hand. Up until now, they've completed the 8th generation of their growing walls. The farm's systems are getting more decentralized by creating plug-and-play systems allowing for anyone to grow with it efficiently and sustainably.

Once the company finalizes "proof of concept" and has the new farm up and running, they'll look to outside investors to help expand their hyper-local model into many more communities creating various job opportunities and healthy food options for everyone. 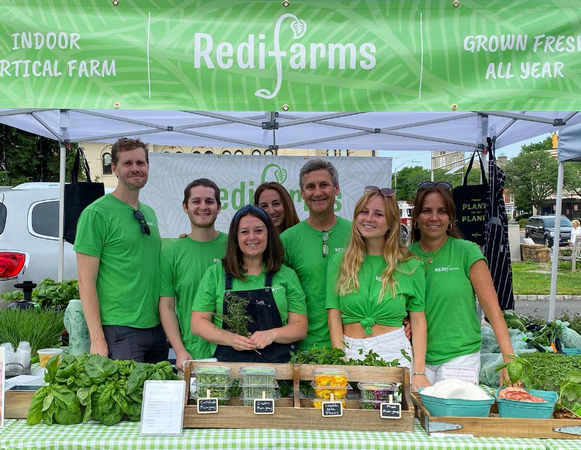 The team had its first Westfield Farmer's Market recently

"There are many indoor vertical farm startups that have received a lot of investor money to develop the best way to grow produce indoors. They have lots of tech people and automation, but they're not looking at the bigger picture of all the problems with the food industry in America right now. We are trying to tackle some of the other issues like the large carbon footprint involved throughout the entire industry. By keeping things local, we can reduce packaging and shipping and maintain ultimate freshness and taste. By offering to educate our children as well as adults, we hope everyone learns to appreciate the overall benefits of local produce all year long. It just makes sense." Greg adds.

Expanding the concept nationally
"At this point, we're really open to any party or individual that shares our values to invest and/or collaborate on our long-term goal of having local Redi-farm locations throughout America," says Michele, "Other towns have already reached out to us, and ultimately, we'll keep connecting to other communities about the win-win social impact this project has."