At the HortiContact horticultural fair last month, we came across Ewout Valstar in a different role. Ewout is no longer a pepper grower; he is now a planner. He has fulfilled this role for Vyverberg Advies & Begeleiding since 1 January. Moving just down the road in De Lier, he started work after he and his brother Wibo handed over the family business to a fellow pepper grower at the end of last year. Huib Herbert states: "With Ewout, we have someone with a different perspective. 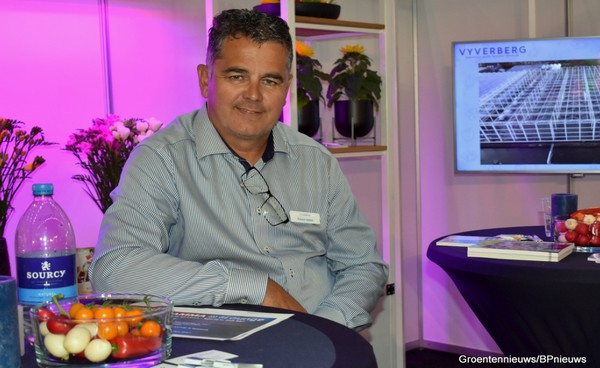 Ewout at HortiContact in May this year

Respect
Huib Herbert is the owner of the consultancy firm. Ewout and Huib have known each other for a long time. "When new buildings were built for us in 1997 and 2007, Huib supervised the construction twice." When Ewout saw a vacancy passing by at the end of last year, he decided to respond. "When it became clear that we were going to stop growing, I wanted to do something else with my experience. I really can't sit still." The fact that Ewout spent ten Fridays at Vyverberg last year bears witness to this. "We had outsourced the crop work, and we did not do the harvesting on Fridays. Not long after Ewout responded to the vacancy, Huib called, "It was quickly finalized after this."

For Ewout and Wibo, ceasing growing was initially not part of the plan. In fact, they had first asked a broker to look around for another garden with a view to the future. "He offered us a garden outside De Lier. We thought that was too far," laughs Ewout. The brothers did not have any ambition to grow in dozens of hectares anyway. "Those who do deserve real respect." Eventually, instead of buying a greenhouse, selling it came up. "In May, we sold the greenhouse to the Overgaag boys."

Broader view
By working at Vyverberg, Ewout was able to get a taste of a new working life. "On the Fridays at Vyverberg, I saw how they worked and could see what I could contribute. I then suddenly saw how much work is involved in something as 'simple' as laying a water main. As a grower, you tend to think: 'Hey, do it like this and that'. However, there is a lot of work involved in seemingly simple adjustments in and around the greenhouse. Everything has to be considered carefully. There is also a great deal of paperwork involved."

In his new role, Ewout often visits growers. "That is one of the nice things about my job. Along with one other colleague, I am a former grower here at Vyverberg. That makes you look at things differently sometimes. I think I have a broader view." He gives an example in terms of energy. "The desired temperature in the greenhouse can be achieved in various ways. Vyverberg is strong in the technical installations for heating. Together with the grower, you find the best way to achieve the desired temperature."

English
These days, energy issues often come up at the consultancy. "In terms of new construction projects, it is logically difficult for growers to invest at the moment. We are strong in the United Kingdom, among other countries. The high energy prices make it difficult. There are projects going on, but they are more likely to be projects where old glass is replaced by the new glass while retaining an existing gas contract than projects where the energy issue still has to be determined."

Many growers are currently having Vyverberg take a good look at that energy issue. "We are currently going through the possibilities for saving energy with growers. Internationally, we are even seeing larger growers asking us to go through the settings with them. At times like that, my experience as a grower comes in handy." Laughs: "And in the meantime, I'm brushing up on my English."

Future
Closer to home, the consultancy sees that many growers are also reviewing their institutions themselves. One thing is certain, according to the former pepper grower. "With just a boiler, you can hardly be a vegetable grower anymore." He sees a future in new developments, such as growing in cultivation cells. "Vyverberg's knowledge of budget cultivation in cultivation cells and the combined knowledge of technology and cultivation experience is part of the future."

He has not regretted the switch he made for a second. But it does take some getting used to. "From 95% walking work, I have gone to 75% sitting work."