Microgreens, though tiny, are packed with nutrients and flavor. Their use in salads has grown, but researchers have not yet focused on their susceptibility to foodborne disease outbreaks — common in the salad green industry.

Kristen Gibson, professor of food safety and microbiology for the Arkansas Agricultural Experiment Station and director of the Center of Food Safety, led a team of researchers to understand possible food-safety risks associated with microgreen production. The results so far show that illness-causing potential depends on microgreen variety and type of soil alternative.

The Agricultural Experiment Station is the research arm of the U of A System Division of Agriculture. 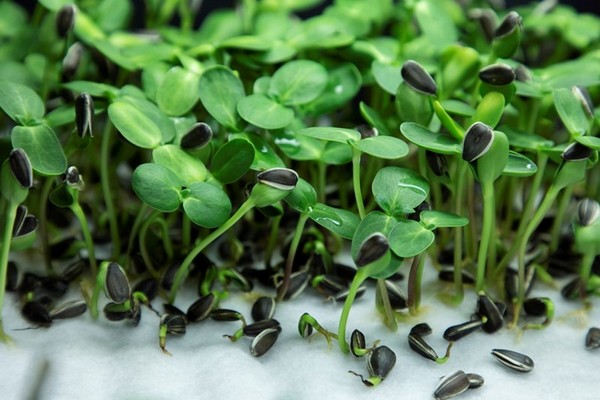 One of the microgreen varieties tested was sunflower. Pictured are eight-day-old sunflower microgreens being grown on a biostrate grow mat — a soilless substrate. Credit: Nick Kordsmeier

Cultivation
Microgreens are "immature seedlings of edible plants," according to an article by Gibson and other researchers. They are sometimes confused with sprouts because of their similar characteristics, but sprouts develop in less time, according to the article. A sprout only has its first set of leaves, the cotyledon, while a microgreen grows a second set, the true leaves.

As opposed to more mature salad greens, microgreens are typically grown indoors and do not use traditional soil. Instead, growers use growing mats, peat with vermiculite, hemp mats, or other recycled plant materials, Gibson said.

Microgreens have not yet been the cause of any outbreaks, Gibson said. But "in the past three years, there have been probably six to eight recalls of microgreens because of the potential for the contamination of Salmonella or Listeria."

"These recalls are indicative of the fact that product can be contaminated, or the environment the product is grown in," Gibson said.

In salad greens, the most recent outbreak of foodborne illness ended on April 4, according to the Food and Drug Administration. Listeria monocytogenes were detected on lettuce harvesting equipment.

Eighteen illnesses were reported, 16 of them needing hospital care and three resulting in death, according to the FDA.

A former student of Gibson's, Gina Misra, a researcher on this project who owns a microgreen operation in Delaware, introduced the idea to her after realizing the gaps in knowledge about microgreen production, Gibson said.

"Human noroviruses are the No. 1 cause of foodborne illness," Gibson said. But they cannot be readily grown or cultivated in the lab, unlike the Tulane virus.

The researchers also tested virus persistence on the leaf surface through direct inoculation three days before harvest time. Tulane persisted in both soil alternatives, but the viral count reduced from 10 million to 100,000 during the 10-day growing cycle.

It is promising that the virus does not persist at the initial experimental level over time, Gibson said. Some aspect of the soil alternatives causes the virus to no longer be infectious.

"Technically, if you have a low-level contamination, and you did see this decrease, then maybe the risk would not be very high for the virus to end up in the final product or cross-contaminate in any way," Gibson said.

"But the other thing is that you don't need a lot of virus present to cause infection," Gibson said. It could be 1,000 or even 18 virus particles that cause illness.

Cleaning solutions
Though production parameters like temperature, humidity, and lighting can be controlled, "the indoor environment can be a source of pathogens that could be food safety issues," Gibson said. "Indoor production gives this idea, maybe false sense, that you can control things better," Gibson said.

"You can easily have pathogens if you're not practicing cleaning and sanitation practices or good agricultural practices that would be applicable to those environments," Gibson said. Personal hygiene is also important because microgreens are a crop with "direct-contact handling" during harvest time.

Even before planting the microgreens, making sure the supplies like seeds and growing material come from reliable sources is important, Gibson said. Both of those items risk contamination. "The implementation of all those practices and being really vigilant about it is a really good way to ensure that your product is as safe as you can make it be," Gibson said.

Many microgreen growers are smaller operations, so they might not follow all the agricultural standards of larger farms, Gibson said. Regular testing for contamination might not be feasible for some.

Gibson wants to be able to provide food safety protocols for smaller microgreen growers more specific to their operations.

What's next
Gibson is the lead investigator on a $550,000 U.S. Department of Agriculture National Institute of Food and Agriculture grant for developing microgreen training materials. They did not use funds from the grant for this project, but this research feeds into the overall goal, Gibson said.

Wenjun Deng, who received her Ph.D. in July 2021, was a researcher on this project. She used funds from a U of A Graduate-Professional Student Congress research grant to support this experiment, Gibson said.

Adam Baker, a post-doctoral fellow, helped in the lab as well. Gibson is exploring sanitizing products for use on edible tissue and is considering testing other popular microgreen varieties and possibly other microorganisms.

Gibson is also interested to see how viruses and bacteria interact with each other in the soil alternatives.