Skytree, developers of decentralized direct air capture technology (D-DAC), announced the launch of its first carbon capture units for indoor farming. The company is the first to deploy an onsite carbon capture unit at Growy vertical farms in the Netherlands.

Skytree is reimagining the entire current carbon supply chain for indoor farms by removing CO2 from the outside air and redistributing it to indoor farms. With Skytree, vertical farms, shipping containers, and greenhouses can grow crops via a continuous enriched stream of CO2 removed from the ambient air.

After completing a successful field test at Growy in Amsterdam, Skytree units provided a more accurate CO2 supply than carbon cylinders and tanks. The target CO2 concentration was maintained in the growth chamber for over 72 hours to help grow crops in accordance with the dosing plan provided by Growy. In addition, vital CO2 concentration level stability was reliably recorded. 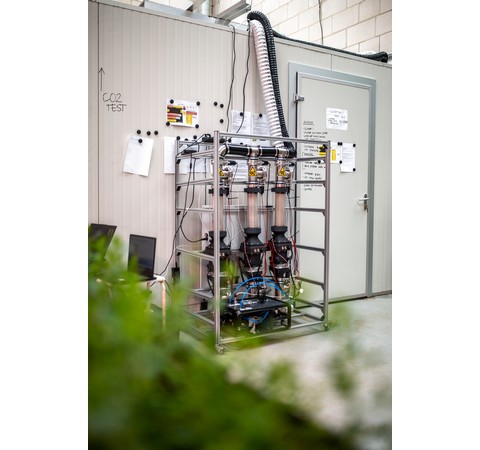 "Skytree is giving vertical farms a path to being more sustainable while cutting costs related to buying the CO2 necessary to grow crops indoors," said Ard van de Kreeke, Manager, Growy. "Skytree is helping us envision a future where we no longer have to be dependent on buying and storing carbon for food production, created from fossil fuels."

The fully-automated, modular unit can be easily installed onsite, connects to the climate control system, and continuously delivers an enriched airstream with exactly the right level of CO2 in the smallest possible footprint. The patented technology for small-scale, decentralized, direct air capture has been developed in Skytree's lab in Amsterdam through years of methodical research.

The first series of Skytree's carbon capture units providing up to 20kg CO2 per day are now available for pilot projects across Europe and North America.

"We are excited Skytree's carbon capture unit has been successfully tested at an indoor farm. And we are on track with market introduction and volume production," says Rob van Straten, CEO of Skytree. "The business benefits are clear. Sktyree is more cost-effective than buying carbon from industrial players, transporting it to indoor farms, and reducing the farm's carbon footprint. Our Skytree units can be integrated in indoor farming automation systems, which allow them to fully control the supply of CO2 to ensure optimal distribution within the indoor farm."

Skytree is scaling up production in both Europe and North America, where the industry is expected to more than double in size by 2025 (Allied Market Research). With indoor farms focused on complete platform automation, it is expected many will make the switch from their current CO2 supply chains to smart and sustainable, lower-cost onsite carbon capture. Skytree for indoor farming is the first carbon capture product that Skytree is introducing.