Twentythree year old Andy Jian knows how to capture an ecosystem. On autumn days in 2021, he would go to the Hamilton golf course pond and scoop soil, plants, and water into mason jars. He simply wanted to let these fester on his windowsill and explore the question: what happens to the environment in a closed system? Though he didn't realize it at the time, this terrarium-making hobby would eventually lead to his Emerson research project, "Gaining Insight into the Feasibility and Operation of Aero-Aquaponic Systems through a Mathematical Lens."

At the same time, Jian was making terrariums, and he was taking Professor of Mathematics Andrew Dykstra's class on differential equations. A semester-long project in the class involves using math to model various situations. Instead of modeling his assigned situation, though, Jian emailed Dykstra to see if his terrarium, as a closed system, could work for the project. Dykstra said that they could. 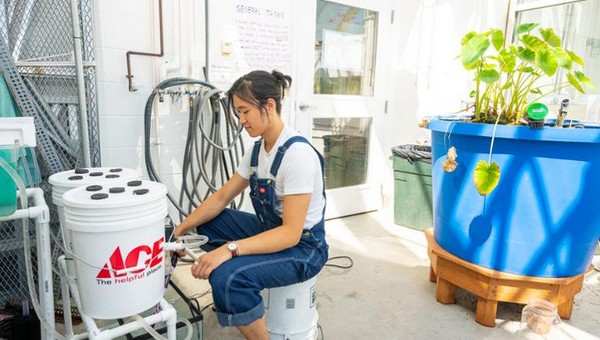 Andy Jian tests and balances the pumps in his system to make sure that the water level in the tank is more or less constant. Photo: Zack Stanek

After that successful class project, Jian became increasingly interested in modeling closed environmental systems with mathematical equations. Aquaponics, a closed system that uses fish to grow plants, seemed like an obvious choice for his Emerson project. But just three days before his proposal was due, Jian stumbled upon a textbook section on aeroponics, a way of growing plants in the air by misting their roots. Theoretically, the article said, aeroponics could be combined with aquaponics to maximize plant-growth efficiency, though the author had yet to see anybody do so in a scientific research context. Jian wanted to change that.

"I sent the new proposal to my advisor [Professor Dykstra] last minute, just saying, please, I know that we haven't talked about this at all, but it's something I really want to do," Jian said. "And he was like, 'if you think it'll work, I trust you.'"

Now, Jian spends his summer days building his own aero-aquaponics system. On the side, he's coming up with differential equations to mathematically model it. One model relates plant growth to ammonium and nitrate levels in the water and the number of fish in the system.

Once his aero-aquaponics system is up and running, he can plug the data he gets from it into his mathematical models. This will allow him to flesh out parameters and tweak his equations so that they accurately model the system. From there, he can gain analytical and qualitative insights on how combining aquaponics with aeroponics affects plant growth.

Beyond theoretically growing plants more efficiently, the aero-aquaponics system saves ground space with its vertical design. This is intriguing not only to agricultural engineers but also to people in cities who have limited space to grow produce.

"If everything goes well, people would be able to tweak and use my set of differential equations to model whatever kind of aero-aquaponic system they wanted," Jian said.

Jian is excited to spend the rest of his summer surrounded by his favorite things: construction, plants, fish, and math. As he considers his future career, he hopes it does not look too different from this summer. "I would want to work in an aquaponics lab or have a startup where my friends and I take abandoned buildings in cities and turn them into aquaponics labs for growing food," he said. "That's the dream."