Urban Farming Partners (UFP) soft opened their first operational indoor farm, GroGrace, on 3 August. Located in an industrial park in Penjuru, Jurong, the 650 sqm facility is opened by the Guest of Honour, Dr. Amy Khor, Senior Minister of State for Sustainability and the Environment.

Besides that, esteemed guests H.E. Margriet Vonno, the Ambassador of the Netherlands to Singapore, and Mr. Ahmed Aboutaleb, Mayor of Rotterdam, the Netherlands, were present at the opening. 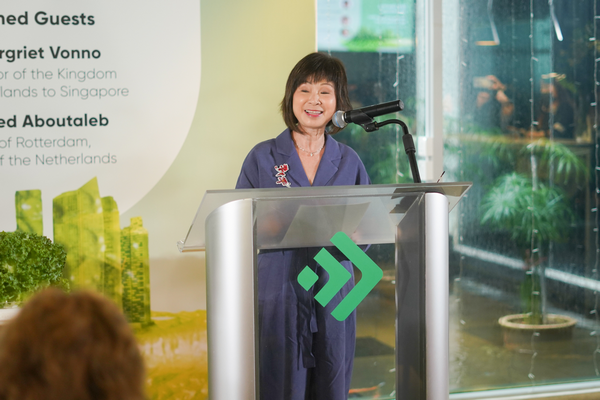 The GroGrace Facility uses multiple layers of dry hydroponics systems. Besides that, it utilizes a growing space with an aspect ratio exceeding 40%, which significantly benefits air circulation and uniformity of climate. This prevents stress on the plants and provides the flexibility to grow taller crops like leeks. 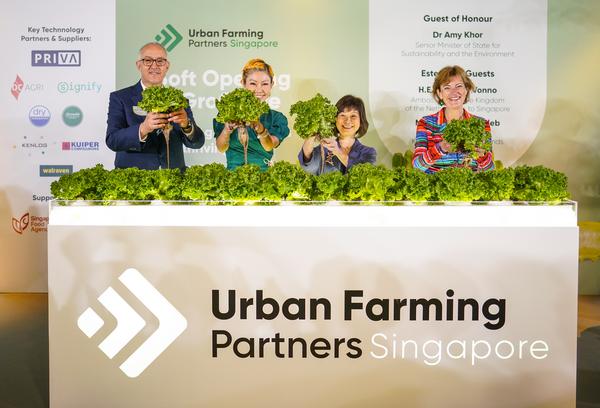 (From left) Mr. Ahmed Aboutaleb, Mayor of Rotterdam, The Kingdom of the Netherlands, Grace Lim, Co-Founder and CEO of UFPSG, Dr. Amy Khor, Senior Minister of State for Sustainability and the Environment, and H.E. Margriet Vonno, Ambassador of the Netherlands

Originating from the public-private partnership and part of the program 'Partners for International Business', the UFPSG partnership includes the Netherlands Enterprise Agency, a government agency with access to a global network of embassies, such as the Embassy of the Kingdom of the Netherlands to Singapore. 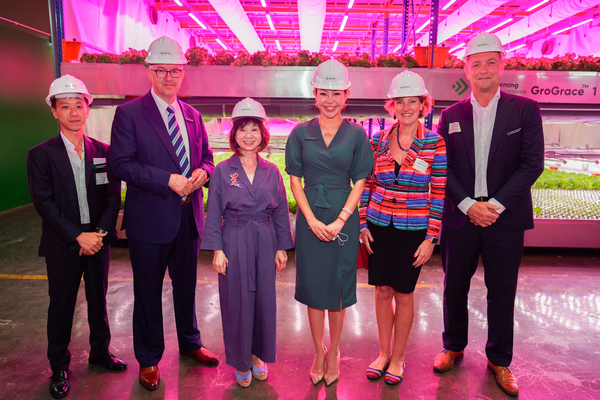 (From left) Mr. Darren Ho, Head Grower, UFPSG, Mr. Ahmed Aboutaleb, Mayor of Rotterdam, the Netherlands, Grace Lim, Co-Founder and CEO of UFPSG, Dr. Amy Khor, Senior Minister of State for Sustainability and the Environment, and H.E. Margriet Vonno, Ambassador of the Netherlands to Singapore and Mr. Wouter Vos, Co-Founder and Project Leader of UFPSG took a tour inside GroGrace.

A self-sustaining partnership
This collaboration between Singapore and the Netherlands is born out of both countries being fuelled by a need for survival and self-sustenance rather than developing innovative technologies for vanity's sake.

Additionally, the collaboration between Singaporean and Dutch entrepreneurs embodies the continued spirit of a healthy exchange of knowledge between nations for mutual benefit, especially regarding the globalized issue of food security.

The 650 sqm facility consists of four 180 sqm growing floors, the top three of which will be used to grow leafy greens and herbs, while the bottom floor will be used for ongoing R&D for the growth of other kinds of produce. The current setup is expected to yield 33 tonnes of produce annually. Additionally, a key function of the GroGrace facility is to serve as a training center for future upscaled Urban Farming Partners facilities utilizing patented Dutch horticultural technologies. 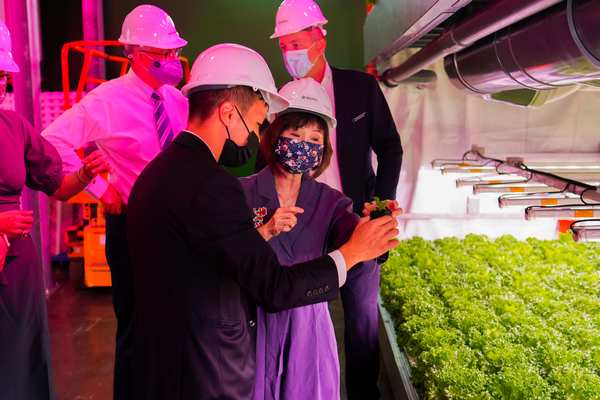 Strengthening local production
GroGrace is UFPSG's fruit of labor, with funding support by the SFA under the Agriculture Productivity Fund (APF), enabling the urban farming initiative to take the next steps toward strengthening Singapore's food supply chain and paving the way to food security.

UFPSG's mission is to be a total solution provider for indoor urban farms, integrating proven and patented Dutch technologies that are more sustainable alternatives to traditional horticulture. UFPSG's vision is to build cities' food resilience by enabling high-quality vegetables from sustainable growing technologies.

GroGrace's vertical design is scalable and can be easily assembled, making it a great solution for a highly urbanized country like Singapore.

Click here to watch a video of the soft opening by Channel News Asia.