The Netherlands: Turning insects into fertilizer, feed and oil

With a couple of trucks at a time waste streams are brought into Protix' production facility in Bergen op Zoom, the Netherlands. And, many larvae are quite content with that as it feeds them entirely. With that, they're forming the basis of both new protein-rich animal feed products and organic fertilizer for horticulture.

This fertilizer is the bridge to the agricultural and horticultural sectors, but the production method also has clear interfaces with the sector. The production of the insects takes place in a multi-layer cultivation facility.

Growth
Protix has been producing at the site pictured above since 2019, the same year in which the building was officially opened by King Willem-Alexander. "It marked a significant growth step for us," says Elselina Battenberg, Communications Manager at Protix.

"Our production capacity at this facility cannot be matched anywhere else in the world. Moreover, we have been expanding even more rapidly since then. " 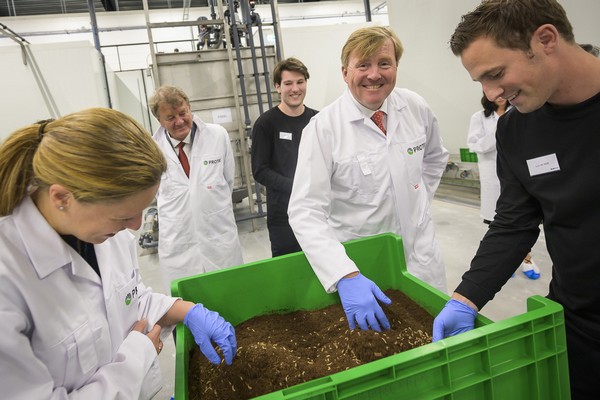 At the time, Elselina had just joined whilst Protix was constructing of the new building. "Four years ago there were fifty of us, now that number has already tripled. It reflects the steep growth of the company, which funny enough is about the same growth cycle of larvae of the black soldier flies." 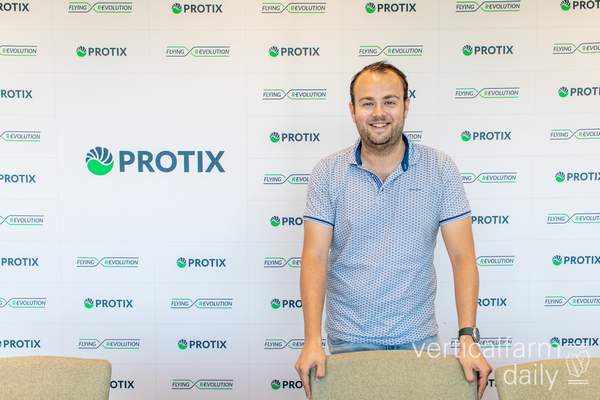 Soil improver for horticulture
Protix's products are used in horticulture, especially the Flytilizer. Thijs Kapteijns, Business Developer Fertilizer, explains, "Our larvae upcycle residual streams - from potato processing as just one example - resulting in proteins and lipids. During this process, another residual stream arises consisting of the skins and excrement of the larvae which are reused as fertilizer. We've seen huge demand for organic fertilizer as well in the past years, which perfectly matches what we offer." 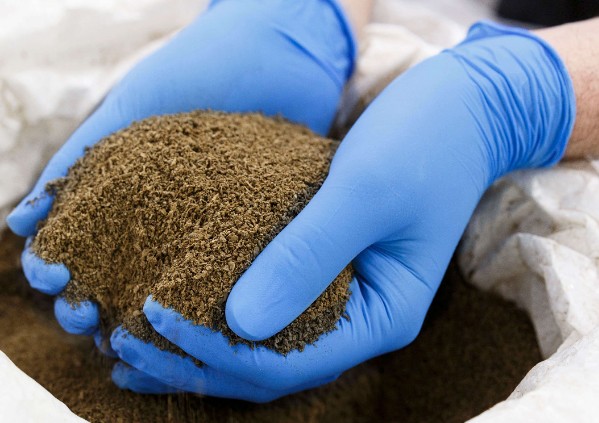 Greenhouse growers do not simply use Flytilizer because it is organic, but also because the product is Skal-certified. The product is not yet applicable for water culture, a technique often used in vertical farms. "It would be great to supply to vertical farms as well, over time."

The origin of the company in 2009 was to develop sustainable feed, with a sustainable substitute for fishmeal as a first concept. Together with co-founder Tarique Arsiwalla, the current CEO Kees Aarts founded Protix to establish insect cultivation as an industry.

At the time, mealworms were really only produced for fishing, so this was ground-breaking work. Following two years of greenhouse trials, the two founders succeeded in growing insects commercially, and soon needed to move to a larger facility. 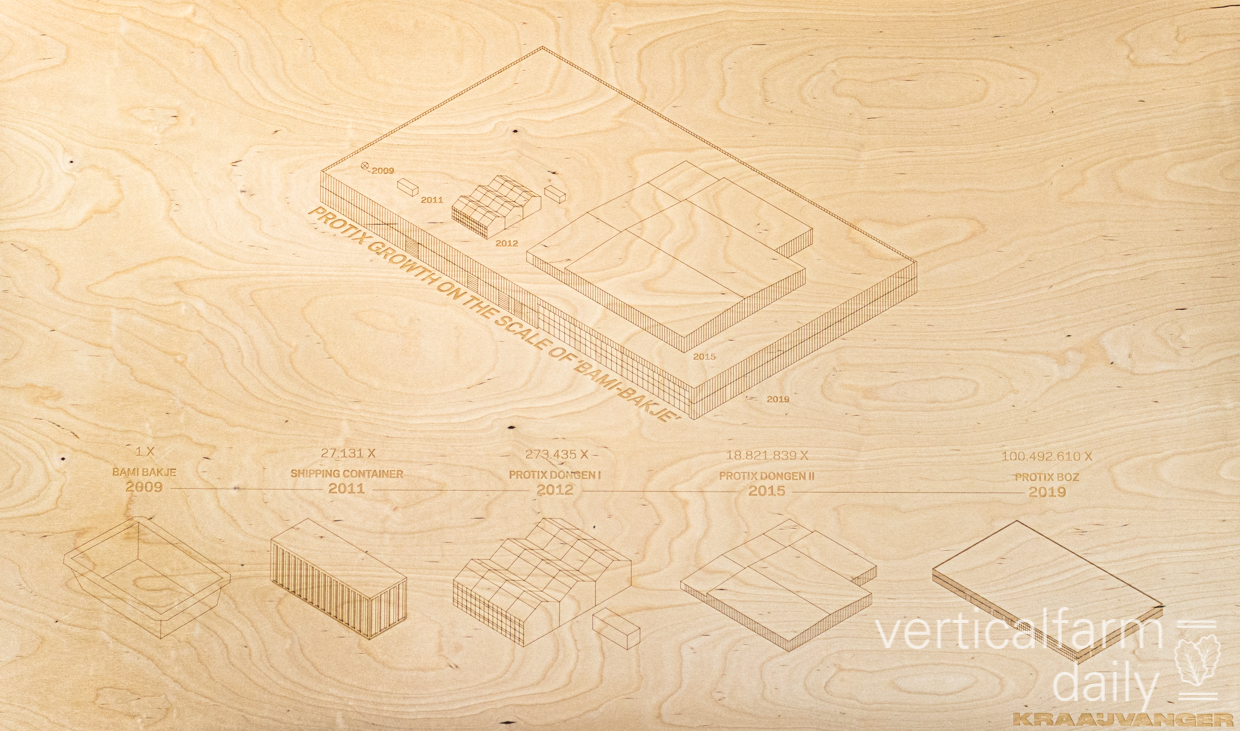 Self-developed technique
In 2019, Protix relocated its production from Dongen to Bergen op Zoom. And instead of a greenhouse, you'll now find a self-developed multi-layer cultivation system.

"The Dongen II production facility formed the basis for the building we are in now. Future premises will be built along the same lines, although we will continue to develop of course." 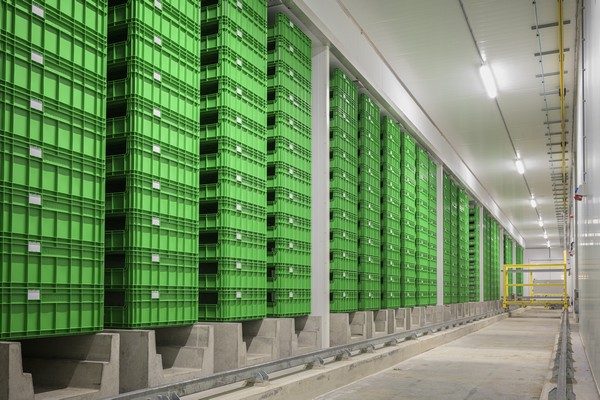 Breeding
The production facility is highly automated, with very little human interaction within the factory. Billions of insects crawl around inside the thousands of crates that are transported by robots and placed on conveyor systems to either feed them or move them onto the next process.

Once fully grown – generally after about eight days - the crate contents are separated and processed. The insects are processed into protein meal, fluid fat and puree. Remaining are the skin and droppings, which are processed into insect frass, the basis for the Flytilizer and Frassor garden fertilizer products for consumers. 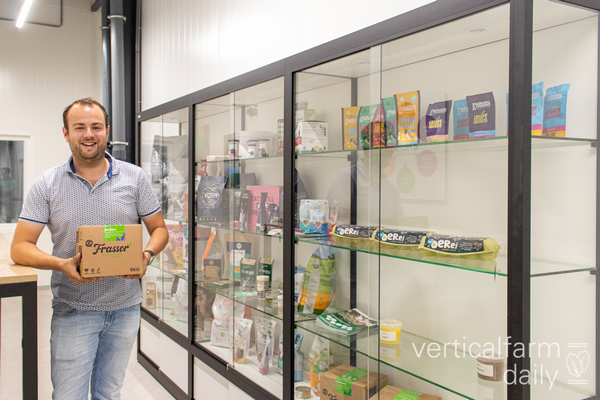 Thijs in front of a rack full of insect-based products

Besides growing and processing the insects, Protix also has a dedicated space for breeding. One percent of the insects are kept for parent lines to create new insects from. To keep innovating, the company is collaborating with an insect breeder to constantly improve its products.

Think of larvae, for instance, which are even more efficient in converting different kinds of waste streams. In comparison to the previous years, the larvae have considerably increased in size.

"All those swarming larvae packed in a crate together generate a lot of heat. This is why climate control in the production facility is important, just as in regular vertical farms," Thijs adds.

Larvae and the black soldier fly (below)

Future
Protix's products are now being processed by other companies into products for (pet) food, livestock and aqua feed. However, insects are also fit for human consumption, and society is gradually gearing up for this with frontrunners pointing out the sustainability and protein aspect of this kind of diet.

Elselina adds: "We're already looking into consumer products. We've now allocated production for three insects for humans: crickets, mealworms and grasshoppers. For every insect and production method, we are obliged to submit an application under the EU Novel Food Regulation."

The company is planning on submitting more applications in the future. In the meantime, the company prides itself on substituting environmentally unfriendly products such as meat, soya and palm oil. Indirectly, these products have an impact on the rest of the food chain as humans are the main end consumers of these products, such as chicken.