Astronaut Bob Hines explores how a crew member’s cognition and perception are affected in microgravity for the GRIP experiment.
Farming, foam, and fire research kept the astronauts busy at the end of the week aboard the International Space Station. The pace of microgravity research is picking up with the Expedition 67 crew spending more time studying a wide array of space phenomena to promote the well-being of humans on and off the Earth. 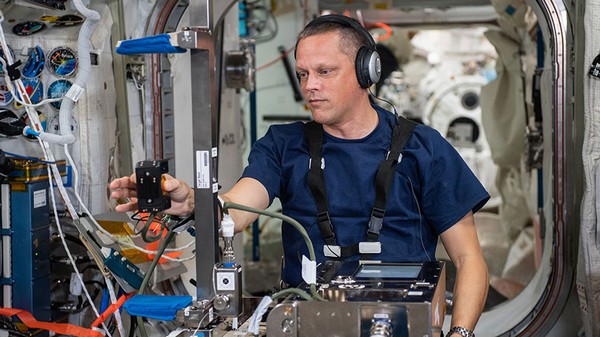 NASA astronaut Bob Hines looked at foams, or dispersions of bubbles in a liquid, inside the KERMIT microscope today, using the microgravity environment to reveal microstructures not possible on Earth. Observations may lead to more advanced space research opportunities and improved consumer products and materials design on Earth.

Robotics is a very important part of the space station, with three external manipulators, or robotic arms, for payload operations outside the station and experimental gear inside the station to assist the astronauts. One investigation is researching the ability to control robots on a planetary surface from a spacecraft in orbit. NASA Flight Engineer Jessica Watkins set up the Surface Avatar laptop computer in the Columbus laboratory module on Friday to begin studying ways, such as haptic controls, user interfaces, and virtual reality, to command and control surface-bound robots from long distances.

The space station is orbiting higher after the docked ISS Progress 81 cargo craft fired its engines for one minute and 46 seconds on Thursday. The orbital reboost places the station at the correct altitude for the upcoming departure and arrival of a pair of Soyuz crew ships.

Commander Oleg Artemyev will soon lead the ride back to Earth with Flight Engineers Denis Matveev and Sergey Korsakov inside the Soyuz MS-21 crew ship. The trio have been aboard the orbiting lab since March 18, docking to the Prichal module less than three-and-a-half hours after launching from the Baikonur Cosmodrome in Kazakhstan. The three cosmonauts spent Friday checking communications systems inside the Soyuz vehicle and conditioning their bodies for the return to Earth’s gravity after six months of living and working in weightlessness.