CEA lighting upgrades – what’s the best solution for your facility?

HID to LED Retrofit
According to Todd Phillips, President of P.L. Light Systems, one of the most common retrofits these days is growers replacing their legacy HPS luminaires with LED lighting. Key drivers of this trend are energy incentives/rebates, greater spectral flexibility, reduced heat loads, and the ability to dim the lighting.

Choosing the right spectrum
When choosing LED lights for your retrofit, one important consideration is the type of spectrum you need. Typically, there are two options which are broad spectrum (white light) or red/blue spectrum. For many indoor grows, where they rely on artificial lights as their only source of light to grow plants, full or broad-spectrum “white light” LEDs are the best option. This is because broad-spectrum LEDs offer plants a more complete spectrum—similar to natural sunlight—that can be used for all stages of growth. Broad spectrum LEDs are also better for workers because white light is easier to work under than blue/red light and makes plant assessment much easier.

Red and blue LEDs, where the light appears pink or purple, are usually recommended for supplementary lighting in greenhouses, where plants are already receiving full spectrum sunlight from the outdoors. Since photosynthesis peaks in the blue and red spectrums, photons are more easily converted into photosynthetic energy at these wavelengths and therefore increase the overall energy efficiency of the lights. 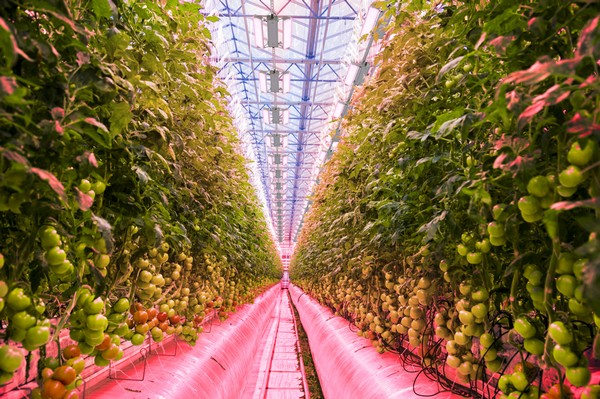 Light Output and Uniformity
While an LED and HPS luminaire may emit the same PPFD, many growers discover they need to install a greater number of LED luminaires vs. their HPS luminaires to achieve comparable light uniformity over the crop. This is because HPS luminaires use special reflectors to widely distribute the light over the crop surface, and the crossover of the light helps achieve a layout with fewer luminaires and higher uniformity. The lack of reflectors and the nature of LED light distribution results in light typically being directed downwards, meaning you generally require more LEDs to achieve the same light uniformity. Lighting manufacturers are heavily focused on addressing this limitation of LED technology. P.L. Light Systems’ recently launched TriPlane luminaire, for example, features independently adjustable LED modules for precise and customizable light distribution.

Installation / Infrastructure Considerations
When you’re retrofitting your legacy lighting system, you also need to pay attention to any potential installation and infrastructure costs. Depending on your building design, you may need to install additional tracks to hang the LED luminaires to ensure uniform light distribution over the crop. A light plan designed specifically for your application will take these things into consideration to ensure you have the highest uniformity. In addition, the distance from the luminaire to the crop canopy should also be considered when making the switch.

You should always review your electrical infrastructure with your electrical designer in advance of transitioning to an LED lighting system. You will likely find that LEDs draw less power than HIDs, so an existing infrastructure that can support HID should be able to accommodate LED luminaires. However, if you are currently operating a 400W or other lower-wattage HID system, that infrastructure may not be sufficient to power higher-output LED luminaires, and an upgrade and/or retrofit may be necessary.

Radiant vs. Convection Heat
Another important consideration is that the heat generated from HPS lights is often used to help offset heating costs in cold climate regions. A 2021 study by Wageningen University found that replacing the HPS luminaires in a greenhouse with LED lights reduced lighting costs by around 40% but increased heating costs by 25%, making the total energy savings around 15%. So, the financial benefits of a transition to LEDs will depend on the energy and environmental costs associated with the application. So, to understand the true energy savings of LEDs, you must consider the entirety of your operation and include other areas of energy usage that can be affected by a switch in lighting technologies.

Consider a “Hybrid” Retrofit
For growers who aren’t ready to make a full transition to an LED lighting system, a hybrid lighting system may be the ideal solution. By choosing to install an LED-HPS system, growers can keep their existing infrastructure, including some HPS luminaires, and can then install additional LEDs onto the existing track/truss. Hybrid lighting systems can be used for vine crops, cannabis, leafy greens, and ornamentals and can be used in both greenhouse and indoor applications.

One reason that a hybrid lighting system is so popular is that it allows growers to take advantage of the heat from the HPS luminaires during winter while extending the season into early fall and spring with LEDs. Another key advantage is that by adding LEDs to your HPS system, you will enjoy some energy savings as the LEDs use less electricity but produce the same amount (or more) of light; while limiting capex costs.

If you are ready to upgrade your lighting but still unsure of which retrofit strategy is best for your situation, you can read the full article here.