Nicotiana benthamiana is a plant widely used as a model organism in research, including for plant pathology and pharmaceutical research. This area of biotechnology research hopes to be able to use plants to produce pharmaceuticals that could be useful in treating cancers and infectious diseases and to create vaccinations.

Nicotiana benthamiana is a nicotiana plant indigenous to Australia and a close relative to the tobacco plant. It is often used in plant-based biotechnology research as it is easily infected and so can be used to develop treatments both more quickly and for a wider variety of uses or ailments.

Producing more proteins
Currently, the proteins needed in this work are either harvested from the natural environment or produced artificially in labs. By producing plants instead, scientists would be able to harvest these proteins on a much greater scale. Growing in controlled environments such as vertical farms also means there is additional control over plant irrigation, nutrition, and any environmental conditions set by government regulations.

In a recent trial, LettUs Grow assessed the performance of growing Nicotiana benthamiana in an aeroponic system, exploring the ability to grow high-quality plants that could be used for the production of beneficial pharmaceuticals.

Seeds were sown into plugs, germinated, and then were gradually thinned out to decrease plant density to one plant per plug once they had been moved to the propagation beds and placed in deep-water culture. Once roots began to develop, they were moved into the aeroponic system. Plant growth and development were monitored until the first flowering buds were formed, when they were then harvested.

The growing process was approximately as follows: 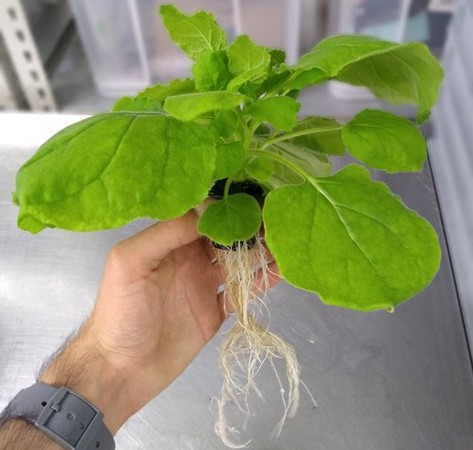 It was particularly noteworthy that none of the 19 plants grown in the systems had any signs of pest or disease. This was a great success since Nicotiana benthamiana is particularly prone to infection, which can slow down scientific trials and research.

With the proof of concept a success, the next stages would be to repeat the trials with a commercial partner in order to enhance the accuracy of results and to focus on continued yield improvement, plant density, and development of fresh leaves.