Wessel van Paassen from Green Simplicity proudly shows visitors his latest showroom. It is not in its location Andijk, but 35 km away in Heerhugowaard. At the Iribov branch. There, director-owner Eloy Boon still had some space left to start a special experiment. Three-quarters of a year later, there is a unique 4-layer cultivation system that is modular, scalable, and affordable. On the 550 m2 cultivation area, about 30 different crops are rooting.

A bare concrete floor AND an idea; were the basic ingredients that started it all. Wessel (31) got the idea, and Eloy was working on expansion plans and a future vision for the company. Iribov is a plant breeder that works on more than 300 crops and delivers some 50 million plants annually. 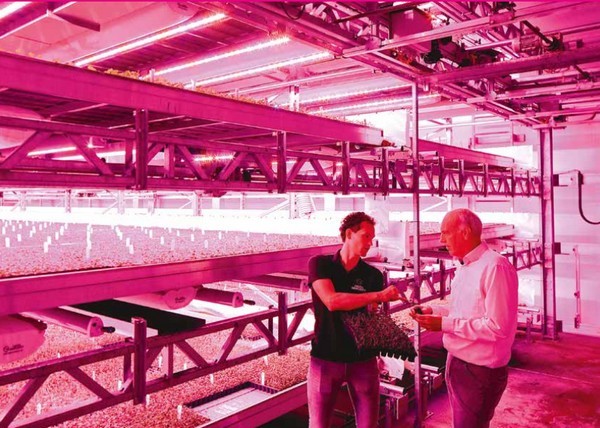 Green Simplicity has more than 60 LED climate cells running for a variety of customers within the agricultural sector and abroad. With each LED research module, Green Simplicity learns more about the optimum balance between light, air, and temperature with all kinds of crops. In line with the LED research systems, the idea is always to roll out an affordable and scalable Indoor farm for full production purposes.

Wessel invited seven suppliers to brainstorm about that. "All smart guys and with techniques that are already being used on a large scale." For example, the tables in the pilot system are supported by pallet racks. "A construction to carry a lot of weight without the need for heavy beams. Those racks are produced worldwide. So, wherever you want to build, you don't have to lug cartloads of material across the world."

Wessel finds the combination of plant and technique extremely challenging, and for that reason, he does not hesitate to sit in the chair of the grower. "Many big players ask the customer what they want and install exactly what they asked for. Green Simplicity, as a small player, works differently. We don't ask what the customer wants; Green Simplicity makes what is best for his crop."

'Is all about the plant'
Now that the growing system has proven its quality for propagation, it's time for Green Simplicity and HT Verboom to move further down the line. Both parties want to jointly market the system and roll it out on a large scale. The number of square meters they use can be expanded effortlessly with this modular system. A pilot with six layers is running in Switzerland, and even eight layers are conceivable.

There are several requests to apply the technique to herbs and the propagation of a wide range of crops in, for example, tomato, cannabis, and flowers.

Whether there is one innovative element in the new system that Wessel is most proud of? "No, it's not about the technique for me. It's about the correct technical integration of the innovations in and around the plant. From no root growth to many, many roots, if you can do that in an automated and controlled manner within the optimal environment.: I think that's the most beautiful thing!"