Casey is a bio-composer in Highland Park, LA. A musician and producer for 15 years, he has been making music with plants for the past two years.

If you are not familiar with bio-composing, we weren’t either. So when we saw Casey posted pictures to Instagram of a ZipGrow Farm Wall connected to a synthesizer, naturally, we were curious to learn more.

Bio-composing is making music using the bioelectricity in plants to control synthesizers.

Through this technique, Casey has learned about the different electrical profiles of various species, how environmental factors influence plants, and how human interaction affects the plant’s electricity. 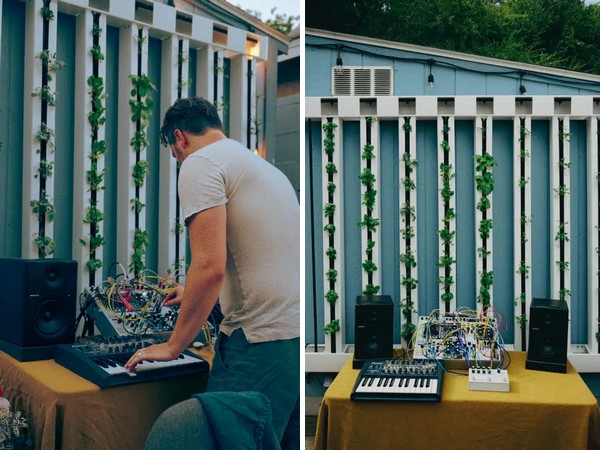 New knowledge about nature
“When we started quarantine in 2020, I reconnected with the garden as a source of inspiration and healing.” Digging around in the soil, Casey began thinking about how much he could learn about creativity and community from nature. “I wanted to create a project based out of the garden, inspired by what I was learning about plants; the sharing of nutrients, the interconnected root structures, mycelial networks in the mushroom kingdom.”

His project Botanical Sound is rooted in connecting back with the garden as a food source, vibrant creative environment, and community. “What if we made art in a connective ecosystem rather than a competitive one?”

At the start of this project, his compositions were primarily based around using one plant at a time. That is until he discovered hydroponics and the Farm Wall. Casey and his wife wanted to expand their growable square footage but had run out of soil space, so hydroponics was a natural next step.

“When I first came across the Farm Wall, I was blown away not just by the design and functionality but also by the potential of turning it into an eight-channel instrument. In truth, I saw an organ. The eight channels of constantly variable plant life in a small footprint become a beautiful, functional, and interactive way to perform and compose with the garden. So, I redesigned my modular synth system to accommodate and monitor all eight channels.”

In harmony with nature
Casey connects eight pairs of electrodes to plants in each channel and runs those wires into a patchbay on his modular synthesizer. Using different biofeedback converters, he converts the raw plant data into control voltage or MIDI, allowing him to use that input to control and modulate any musical parameter he wants in real-time.

“Depending on how I patch things up, the plants can generate melody, perform live sample manipulation, FX modulation, and many other things. As I perform musical ideas, the plants can manipulate them and generate new ones, creating a call-and-response musical format. I can patch through any channel with different plants to get new and varied electrical profiles. Like switching players.”

Casey uses the electricity produced to make and manipulate sound. “While the plants aren’t making their own sound, what they do with the sounds they control is unique. Mediterranean plants (Rosemary, Lavender) have a different electrical profile from houseplants (Pothos or Fiddle-leaf Figs) which is different from leafy greens or fruiting species. One of my favorite moments when sharing this experience with an audience is switching between 2 different plants but letting them control the same sounds. This way, you get to hear how those plants are uniquely processing their environment.”

This is his first season with the ZipGrow Towers, and he’s also reaping the benefits of healthy harvests.

“I am finding it brings out the childlike wonder in all ages, engaging our curiosity, making the familiar feel new. We have so much to learn from the garden, and now we can listen in a new way.”