A single tomato looper sneaking into a greenhouse can cause major problems. The moth with the scientific name Chrysodeixis chalcites can multiply at lightning speed once in the greenhouse. "If you miss the first infestation by the caterpillars and also fail to stop the second generation, the third generation is guaranteed to eat your greenhouse bare," Peter Kerkhof of LedsProtect knows. That disaster scenario for growers is virtually unheard of, as growers are becoming increasingly vigilant. UV light traps from LedsProtect help growers do just that, both in monitoring and controlling these and many other pests.

The traps have been doing that for years, but since last year an updated version of the trap has been available. With a fluorescent trap, better LED lighting, and lenses, the trap has been made even more attractive to pests. "With the innovations, we are even better at being lower in the UV values of the LED light. Insects are sensitive to UV up to a certain wavelength. You want to be right on the peak of the wave with the trap. Special plastic allows the UV light to pass through well. We are one of three companies worldwide using this special plastic."

Tomato looper
Tomato looper is a problem in a lot of crops, from ornamentals to fruiting vegetables. "The caterpillars are real omnivores," he says. Peter cites as an example a chrysanthemum grower who was troubled by the caterpillars and moths. "This grower put out several traps a few months back, and now he catches the moths well."

As an advice, LedsProtect advises growers to hang nine traps per hectare. A trap has a range of about 15 meters. "Moths see at most ten to fifteen meters. Adding more light to make the trap even brighter has no use, according to tests," Peter says.

Catching both males and females
The pest control specialist specifically calls the tomato looper a "pretty agile moth." Because the moth can be attracted to UV light, it is easy to catch it in the greenhouse. So the light traps allow growers to control the pest, but Peter warns that the traps are not the only solution for growers when problems arise. "However, the trap does help growers solve problems," he says. This is because the trap also helps monitor and signal pests. "For signaling pests, the trap is ideal because we also catch females and not just males, as with pheromone traps. As a result, what you find in the trap gives a good picture of how heavy the infestation is." 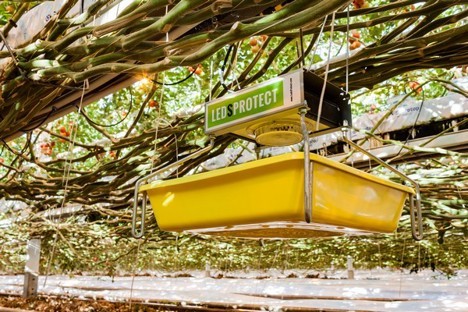 Strategic placement
Peter has to laugh when asked if he is sometimes told by growers that the trap 'doesn't work' because there are no moths in it. "Sure, I do indeed hear that sometimes. My answer, then, is that the grower has done things right. I don't know any grower who can keep track himself of how many bugs fly in through his windows, for example."

A final piece of advice from Peter is to hang the traps in strategic places. "By hanging the traps in those places where the grower passes daily, it is easy to scout pests. More and more growers keep good scouting schedules. Both the government and major buyers of products no longer want chemicals, so the means of control that used to work well when things got out of hand once, aren't coming back. Our traps are, therefore, an increasingly important component in growers' pest management."