The desire for a change in pace and the allure of an untapped New Zealand food market led Brian Turley to give up his 25-year career as a chef in favor of growing one of nature’s superfoods – mushrooms. Eighteen months on, and Brian has no regrets.

Aniseed, vanilla, orange, and cinnamon are not aromas commonly associated with mushrooms, but for Brian Turley of Motueka, they are among the engaging attributes of the fungi. “Most people don’t notice the smell of mushroom mycelium, but those of us who grow them do and can identify different fungi by their smell,” says Brian, who grows and sells fresh mushrooms and mushroom products at local markets under the name Mighty Mushrooms.

Mycelium is the network of threads, called hyphae, from which mushrooms grow. “Many fungi have a sweet, pleasant smell. Phoenix oyster mushroom mycelium smells of aniseed and vanilla, and Hericium novae-zealandiae – or coral tooth – which is native to New Zealand, smells of cinnamon and oranges.” 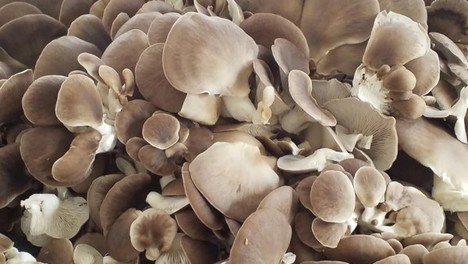 It was, however, the taste, texture, appearance, and relative rarity of gourmet mushrooms that prompted the former chef to grow them himself. “When I was working in London, we had access to a very wide variety of mushrooms, but when I returned home to Auckland, I found it hard to source the more unusual varieties.”

Looking for a change
After 25 years of working as a chef in both New Zealand and overseas, Brian and his wife Chomphoo decided to seek out a quieter, more family-friendly lifestyle in the Tasman region. That was 12 years ago, and while Brian initially continued to cook, the physical toll the work took and its long hours caused him to look for something different.

Two and a half years ago, he founded Mighty Mushrooms, learning by trial and error how to cultivate and grow mushrooms commercially and how to process them into a range of gourmet products.

Urban growing
The gourmet varieties were chosen because few other growers were producing them, and they grow on sterilized wood pulp rather than compost, meaning they are ideal to grow in an urban environment.

Growing and processing mushrooms is now a full-time job for Brian. The process begins with cloning each variety to produce the next generation. “We use cloning so we can be sure of the quality of the mushrooms we grow,” he says.

Small tissue samples are grown on agar in a petri dish or in a sterilized honey and water solution. The resulting substance from these processes is called spawn, which is injected or placed into bags of sterilized organic rye or oats. Once sealed, the spawn is left to multiply inside the bags, which sit on shelves in a dark room.

“The ideal temperature is around 20 degrees for this step,” says Brian, lifting a bag of what looks like moldy grain from a shelf.

Sterile products
Once the fungi have spread through the grain or oats, it is added to the growing medium made from shredded wood pellets.

“I used to use oak and macrocarpa mulch, but now I buy bags of pine pellets used for solid fuel domestic fires,” Brian says. “The process of turning pine into pellets removes all the oils which fungi don’t like, and the product is virtually sterile.”

Shiitake mushrooms won’t grow on pine mulch, so Brian uses pellets that are sold for smoking fish. He further sterilizes the wood before introducing the fungi, and the bags are then moved to one of four growing rooms, which are also temperature controlled. There the fungi are kept moist by misting devices which encourage growth. As the mushrooms mature, they protrude out of the bags, ready for harvesting.

During the peak of the season, Mighty Mushrooms produces up to 50 kilograms of mushrooms. “We sell only our best mushrooms at the markets, using the rest to make our products, so nothing is wasted,” Brian says.

Those products include pickled mushrooms, Thai mushroom soup, and mushroom curry. “We probably sell more of our mushroom products than fresh mushrooms. We sell most of our mushrooms direct to the public at markets but also supply some top-end restaurants.”

“Fungi are neither plant nor animal but belong to a kingdom of their own,” Brian says. “We are more closely related to fungi than to plants, which is why mushrooms can have such a huge impact on our bodies.

“The Chinese have been using mushrooms as medicine for thousands of years, but western science is only now finding out about their benefits.”