Gail Taylor and her team at the UC Davis Department of Plant Sciences are looking for the genetic keys to making America’s favorite leafy green stay fresher and longer in the fridge.

Taylor and members of the Taylor Lab have found regions on the lettuce genome related to the tiny details of how lettuce leaves are built – structure that can make a leaf more or less hospitable to bacteria. They’ve also found genetic regions related to the plant’s ability to resist bacteria from getting in at all.

Some of those same genetic qualities can make lettuce susceptible to organisms that make it go soupy in your refrigerator.

The team plans more research to figure out the exact relationships among bacteria, lettuce leaf structure, and the genes that control them. In particular, they’re interested in a chromosome that could govern the shelf life of baby lettuce. The team also found genetic regions related to nutritional qualities such as anti-oxidants, chlorophyll, and carotene. 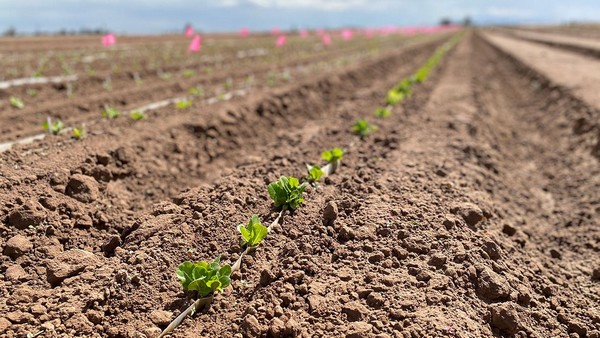 Some varieties of lettuce are more resistant to bacteria than others, and Gail Taylor and colleagues in her lab are looking for the genes controlling that resistance. Taylor, chair of the UC Davis Department of Plant Sciences, aims to develop lettuce that will last longer in your refrigerator. (Courtesy Gail Taylor)

Their goal is to breed longer-lasting, more nutritious greens for the nation’s $3.7-billion lettuce industry. Taylor, who also is the department chair, presented her lab’s findings at a meeting earlier this year of the California Leafy Greens Research Board, an arm of the state Department of Food and Agriculture. Details were published in BioRxiv.

Bacteria get under lettuce’s skin
Lettuce and bacteria have been living together for millions of years. Bacteria find ways to get into the surface of lettuce leaves, and over the eons, lettuce has developed ways to keep them out.

To find varieties of lettuce that are more resistant, the Taylor Lab had a score of commercial varieties planted over three years in test fields in the Salinas and Imperial valleys, in California, and in Yuma, Ariz., both big lettuce-growing regions. They looked at varieties of iceberg, romaine, butter, red- and green-leaf lettuce, Taylor said.

Some of the factors that they found related to bacterial resistance included the size and density of stomata – tiny pores where oxygen comes in, and water and carbon dioxide “breathe” out; the size and pattern of surface cells; waxiness of the leaf surface; leaf size; and plant chemistry.

Team members then looked at the genetics of the lettuce varieties. They found areas on the lettuce genome associated with leaf structures, such as stomata. They also found genetic areas linked to the spaces between leaf cells, where bacteria can invade, Taylor reported.