A case study by the James Hutton Institute

a. The current Scottish energy mix
b. In a full renewable electricity production scenario

The study gives an overview focussing on relevant comparative production streams in Scotland to allow for the potential of VF to be judged in context. The issue of risk of crop loss (increased waste) in OF (open field) agriculture is one that could potentially play a significant role, but at this stage has not been accounted for in any of the discussions or calculations. Similarly, while restricting the modelled results to electricity usage still represents the vast majority of the CF of a Scottish, it is important to produce a full LCA to assess all potential impacts in future examinations. 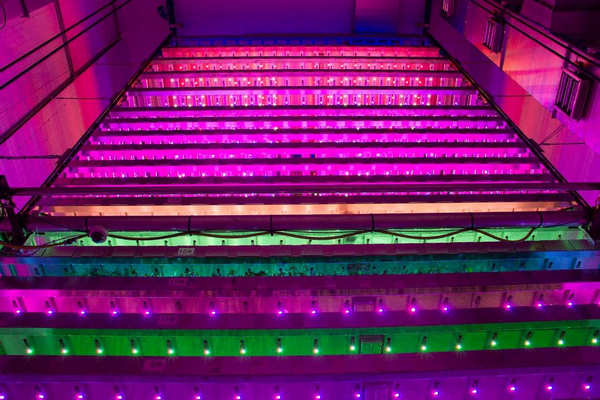 Conclusion
To conclude, this study has highlighted vertical farms as having strong potential for future sustainable food production. Though a large range was found in literature, and the modeled results indicate that with the current electricity production mix for Scotland vertical farms is comparable to existing production methods. Furthermore, by moving to a full renewable electricity production scenario, vertical farms lower their potential CF to be on par with that of UK OF (Open Field) agriculture. This is lower than the options for Spanish produce, or that of heated glasshouses.

Furthermore, it would allow for minimum time between harvest and onward sale and offer consistency in production year-round, not subject to seasonality or adverse weather conditions.

There is a trade-off between CF and water footprint under both the current system and the possible future systems. Under current levels, Spanish OF closely followed by UK OF require the most water inputs, and in a fully renewable scenario, where vertical farms become much more viable, there is a slight increase in water usage caused by some renewable electricity options.

Meaning that these are deemed relatively minor in comparison with the requirements by OF agriculture, however, the importance of the trade-off must be something better explored and considered in a case-by-case scenario. Land use was also found to be highest in the OF systems and lowest in the vertical farm's system highlighting another potential trade-off in the current scenario. While potentially vertical farms offer more effective land usage in terms of output, the issue of desirability and location must be considered and may offer other considerations on this topic.

This work offers an initial insight into a complicated and highly region-specific topic and should be taken as such. Its intent is to develop a conversation around the agricultural potential for Scotland and highlight potential areas of interest for further research with regard to environmental sustainability.

Thus eventually, it offers an insight into the potential for vertical farms on a more global scale by exploring the importance of low-carbon energy production in vertical farm produce.