With a setup comparable to that of brewing beer, MolGen Biologicals attracted attention at this fall's Seed meets Technology. However, those who took a closer look at the event stand didn't see any beer foaming but instead saw a dark green substance. To be exact, the reactor contained the trichoderma fungus, fungal spores. At MolGen Biologicals, they have found a way to breed these fungal spores in an optimal way and subsequently have the plants profit from it. "We produce up to twenty times more and much more consistently." 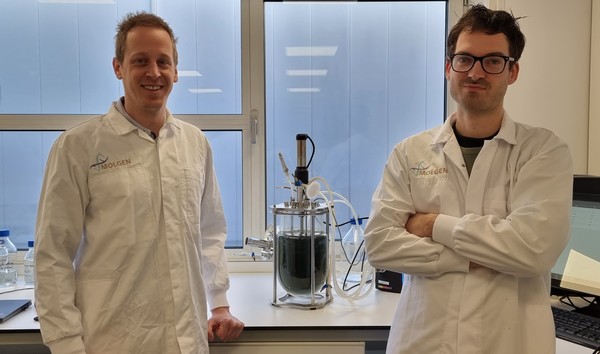 Bas and Eric at a bioreactor in the office

The young company MolGen Biologicals is situated in Veenendaal, The Netherlands. The ones who paid close attention might have encountered MolGen (without the added Biologicals) in the past year already at the aforementioned event in Zwaagdijk-Oost. Where MolGen provides hardware for laboratory tests (DNA extraction kits and an app), the bio division works towards fungus production through fermentation, among other things.

New breeding technique
The roots of MolGen are in horticulture, a sector in which the company took their first steps in 2018. When corona hit, the company succeeded in adapting the DNA extraction procedure in such a way that it enabled the performance of corona tests. Knowing that corona would be temporary, substantial investments were made in past-pandemic activities. Now that corona is hopefully in remission, MolGen Biologicals is ready to grow in horticulture.

Growers are required to use increasingly fewer chemical pesticides. This makes alternative means for crop protection all the more important. A healthy root microbiome, which includes fungi, can help. 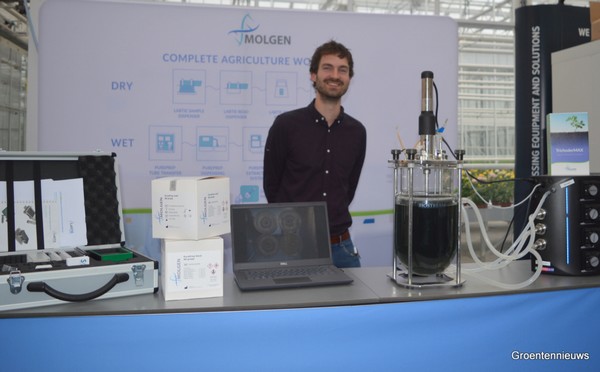 "Fungi that colonize plants to better the soil for plant growth aren't new. In the 70s and 80s, this was also done already. The new thing we do is that we look at the matter as bioengineers. We take a look at the breeding process from the perspective of the micro-organism. This makes for a slightly different approach and result than the way fungi have currently been viewed from an agriculture and horticulture perspective. And then especially the production of good fungi."

The process that the company uses is patented. Besides speed and efficiency, 'batch consistency' is an important advantage. Once again, the beer comparison can be used. "When you're brewing beer, and the taste turns out differently every time, that isn't ideal." This also applies to fungi, although consistent 'brewing' is considerably more difficult. "We manage to have a maximum variation of 10% between batches. This might not seem very impressive, but the ones familiar with breeding fungi know that this is very little. In the current horticultural market, these percentages are much higher. This means that the batches vary greatly."

Field trials with tomato plants, where besides growth, yield, and health, root colonization is also considered. Specifically, the swarming of fungi from the roots after having been placed on soil is being researched. Left; the root colonization after application of TrichoderMAX. Right; a competitive product for reference. Do you see the difference?

Tasting in tomato
The fungi colonize the plant's roots. A protective layer is formed around the root so that damaging fungi cannot reach it anymore. "Trichoderma collaborates with the plant," as Bas Millenaar calls it. Where Eric is the technical man, Bas takes the executive lead. With the fungal spores, MolGen Biologicals creates three products, each with the same goal: reaching the plants' roots.

The product TrichoderMAX has been put to field trials. The goal of these trials was to benchmark whether the different fungi formulations still yielded the desired effect in the field. This wasn't only compared to untreated references but also the use of competitive products. "Remarkable were the results of root colonization, which appeared to show TrichoderMAX being much better capable in colonizing the plant's roots," says Bas. "The tests realized higher yields as well." Eric points out that in literature, it's already known that trichoderma has a positive effect on crops. "A yield increase of some 50% is mentioned for tomatoes."

Natural barrier
Yet, what makes the products of MolGen Biologicals special, irrespective of the particular breeding technique? Eric explains that it's that technique, in particular, that makes the product that much stronger. "When you compare our fungus on a metabolic level, on a cellular level, with the ones of others, you see that the cell wall is built differently. The composition of the membranes in our spores contain many more anchors that are used to adhere to surfaces such as roots. We also call our spores, therefore, 'infective spores' contrasting to the spores or our competitors, which we call 'dormant' or 'sleeping' spores." A timelapse video of the bioreactor, in which MolGen Biologicals breeds fungi, provides insight into this. "The darker it gets, the more spores and, thus, more yield. The fungus spores are filtered, purified, and processed by us in a product of choice."

In the situation of TrichoderMAX Paste, that's for application in seed coating. Bas: "We supply our product to the producer of seed coatings. By giving the fungus directly with the seed, the appropriate fungus is directly in the right place. The fungus is currently able to keep itself alive on the seed for nine months, but these endurance tests are still ongoing." 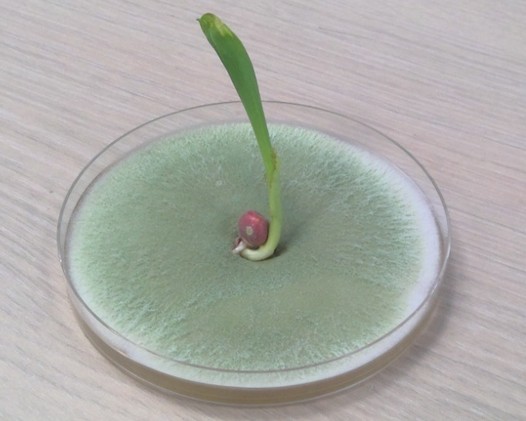 Test on high-quality trichoderma fungus of MolGen Biologicals at a corn seed. The fungus colonizes the seed without negatively affecting the seed's sprouting. Bas: "Addition of trichoderma in a coating improves the sprouting and also the growth. Biomass acceleration takes place in the early stage of the cultivation."

Balance between chemistry and biology
A 'disadvantage' of biological products is that they require preventive action from growers. Once harmful fungi have struck, adding the trichoderma fungus no longer helps. "This varies from chemical substances, which are in that case more effective, although with environmental consequences," Eric remarks.

Still, the grower does have the possibility to, if the fungus through a coating on the seed isn't yet present, get the trichoderma fungi in the right place after all. For this, MolGen Biologicals developed the TrichoderMAX Powder, which growers can add to their irrigation. Bas: "An advantage of this is that the product has a longer shelf life in powder form."

Furthermore, there's the TrichoderMAX Liquid. "This liquid form is filtered from the bioreactor. Compared to powder, however, this product has a shorter shelf life. On the other hand, the grower doesn't need to add additional water to this before watering the plants. And finally, there's the option to mix the fungus in the substrate. Bas: "At a client's request, this is also an option. We see possibilities in many cultivations, both indoor and outdoor."

The young company is already looking beyond trichoderma fungi. "With other fungi, you consider other properties. For example, there are fungi that can treat pest insects." With that knowledge on practical applications, MolGen Biologicals looks into possibilities of breeding such fungi on a large scale. Currently, the company is able to gain fifty liters of product from a single reactor, applicable on twenty hectares. Eric: "Using larger reactors is possible, but that doesn't yet make the production go any faster."