"We can present very good figures, both in terms of cultivation yields and operational costs," says Vincent van der Gaag at the Pijnacker office on a rainy December afternoon. Urban Agrotech, a Dutch startup introduced its patented caroussel container farm just about when Covid started. Now it's time to show the industry what it actually entails.

"The return on investment for our cultivation container is really high compared to other cultivation systems in the market, and the payback period really short." 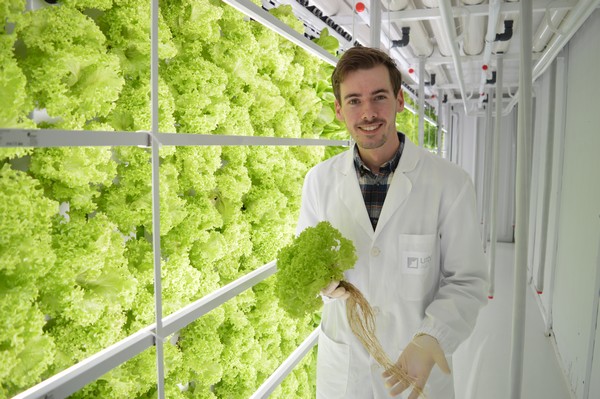 Short ROI
To reinforce this firm stance, the managing director of Urban Agrotech has created a CapEx-OpEx calculator as well as an ROI calculator. This allows interested parties to enter their own country- and crop-specific figures to calculate what remains at the bottom of the line. In the case of buying a container, Vincent shows, using a North American example, that comes down to an ROI of 1.07 years. 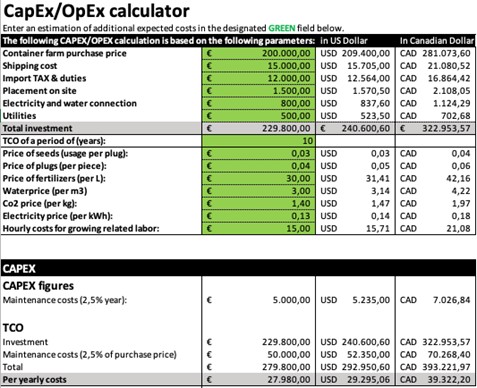 Leasing a container, meanwhile, is also possible. For this, the Dutch company is working with a North American party. "Whoever leases a container, at a low-interest rate of between 6-13%, comes all the way down to a low payback period of 0.02 years." That does sound very short, but when you start calculating from the time of the first harvest, it comes down to that. "Our operational costs are low thanks to ultimate space utilization."

Ton Enthoven, who is also in the Pijnacker office, also knows this. He is the man with green fingers at Urban Agrotech and used to be a grower himself. These days, he tests what is possible in terms of cultivation with the cultivation container. And that's a lot, he says enthusiastically. "We realize very high and high-quality lettuce and herb productions." 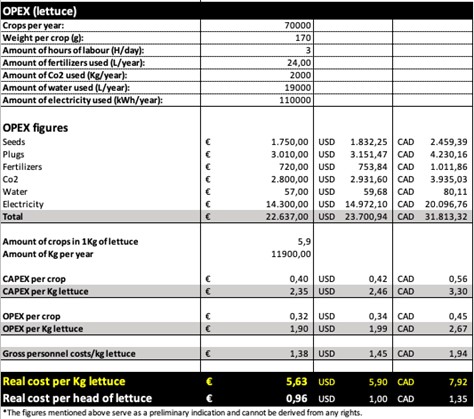 An OpEx calculation is also possible for herbs. Click here to enlarge and see more figures.

Comparing business cases
Those who lease a container can harvest for the first time after 6.5 weeks, Ton estimates. At the high prices paid for lettuce and herbs in many foreign countries, the costs are then quickly paid off.

Vincent: "With our concept, we are targeting growers in countries where a head of lettuce or bag of sliced lettuce quickly costs several dollars." 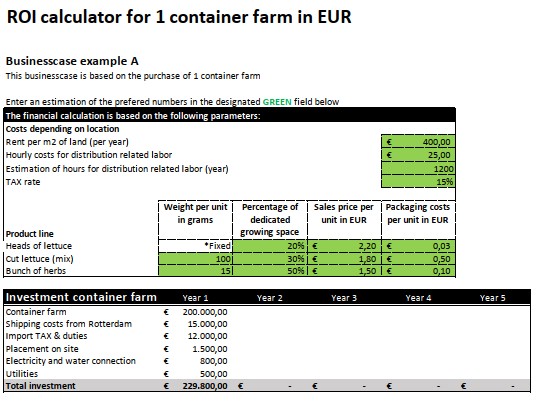 Vincent owes the relatively low energy consumption in part to smart lighting. "Because we grow in cultivation towers in a rotating carousel, we do not need LED lights on each cultivation layer. Moreover, I think the quality of the light you have also plays a big role. Light is more than just micromills." Urban Agrotech counts on LED lamps with a sunlight spectrum.

Cultivation results
Grower Ton, while Vincent does the maths, continues to do tests above all. It is possible to grow butter lettuce, lollo bionda, incised leaf lettuce, parsley (flat and curly), basil, coriander, mint, dill, and celery all at the same time in one container thanks to carefully tuned settings. New crops were also tested, including kale and radishes. "Such tubers that yielded," Ton says enthusiastically while indicating with his thumb and forefinger how big the radishes became. "And they tasted really good too. There was a nice spicy flavor to them."

Growing in the container produces better quality produce than from the greenhouse, Ton and Vincent are convinced. The produce grown goes to the food bank. Since the relocation of Urban Agrotech from Maasland to Pijnacker, that too is a new food bank. At the food bank in Zoetermeer, they enjoy the harvest with them.

Ton also discovered that it can be an advantage to start with larger starting material. The container also includes a nursery section. "If we leave the plants there a little longer in the beginning, we start with larger plants in the regular growing cycle. Especially at the end of the cycle, a head of lettuce can still grow considerably if the initial plant is bigger. It is possible to gain another 15 to 20 grams in fresh weight per day in the last two to three days, we have seen." 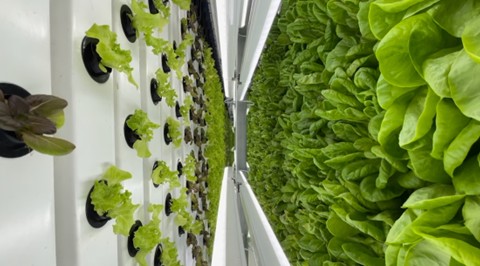 View between the cultivation towers

Looking critical
Urban Agrotech's grower can lean on ample cultivation experience. The users of the cultivation container targeted by the Dutch company usually cannot. Yet that is not a problem, says Vincent. "Our concept has been developed precisely so that relatively inexperienced growers can get on well with it. We supply a manual along with seeds, plugs, fertilizers, and, of course, the cultivation container." "In principle, things can't go wrong then," Ton adds. "And if not, there is always the alarm function that quickly signals if something goes wrong, such as too little water."

With all the tests, results, and (financial) figures, Urban Agrotech wants to quickly convince more people of what can be done with the cultivation container. The fact that a patent has now been issued in the Netherlands for the unique growing concept is confirmation for the men that what they are doing is unique. "With the figures, we want to move people to look critically at what is possible with vertical farming and also compare the range of techniques on offer."