It's Veganuary! Where for the month of January, people are encouraged to try out or adopt a vegan diet. Since there aren't a huge amount of seasonal fruits and vegetables to play with, we're not sure the first month of the year is the best time to go vegan. However, this does reflect how consumers expect to be able to access any and all food at any time - and this now includes being able to eat meat without actually eating meat. In this article, we look at the rising popularity of protein alternatives and how vertical farming technology might be able to help with the protein transition. Whether it be to reduce their carbon footprint, make better choices for the planet, or for animal welfare reasons, many are choosing to reduce or remove meat from their diets. In doing so, there has become an increased demand for alternative protein sources. Alternative proteins can include "fake meats" sourced from plants such as soya, pea proteins, or lentils, as well as from fungi, or less commonly,  tissue cultures, or the consumption of insects.

Even in the past couple of years, the popularity of "fake meat" has soared, with many food manufacturers and well-known restaurants or fast food chains adding meat-free options to their menus. According to a market report by Statistica, the consumption of meat vs. alternative protein consumption is trending towards a 40/60 split - in favor of alternatives. 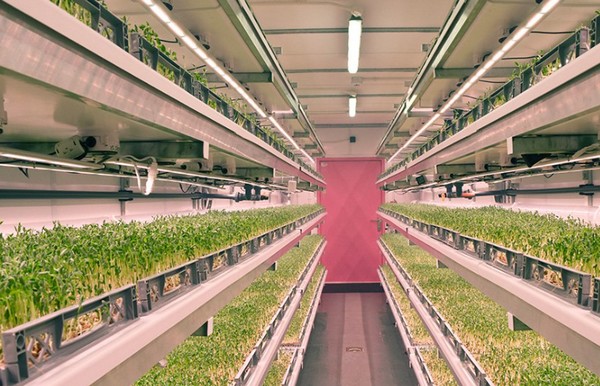 But if moving away from meat consumption for environmental and ethical reasons, we must also make sure that the alternative we're now being offered isn't harmful in other ways. While the US Beyond Meat burger claims to produce 90% fewer greenhouse gas emissions than a beef burger, carbon emissions aren't the only means of calculating environmental impact. We should also make sure that the methods of production aren't playing into existing agricultural issues: such as pesticide use, water pollution, deforestation, or monocultures.
It's widely agreed that eating more plants has health benefits for both people and the planet. If we want people to actually increase the proportion of plants in their diet, food producers should make sure we're increasing the availability of plant proteins like legumes rather than simply diverting existing sources away from consumption in their whole form to make meat alternatives. That is - in order to see benefits, we need consumers to replace their meat burgers with a bean burgers rather than replacing beans with bean burgers.

As an emerging industry, controlled environment agriculture (CEA) and vertical farming could be in a unique position to help. Since vertical farms are still in development themselves, they have the potential flexibility to increase the amount of protein alternatives we are growing and to adapt to the demands of an emerging market whilst also bringing good sustainability credentials - such as using less space, less water and removing the need for pesticides. Below, we explore some of the ways that CEA could support the alternative protein market.

Propagation in vertical farms
Growing crops used for alternative protein in a controlled environment, such as a vertical farm or greenhouse, is largely unexplored. As one example, propagating peas within a controlled environment could be explored as a way of increasing the amount of peas grown without diverting the supply from existing sources - while minimizing the resources used.

It doesn't always make sense to use vertical farming for an entire growth cycle. In the case of pea protein, the cost of growth for this relatively low-value crop would be far too high since growing to seed would take an entire year. It is sometimes more resource, space, or energy efficient to use vertical farming for only part of the process. Propagation is the part of the process where CEA is likely to benefit the production of alternative proteins the most. 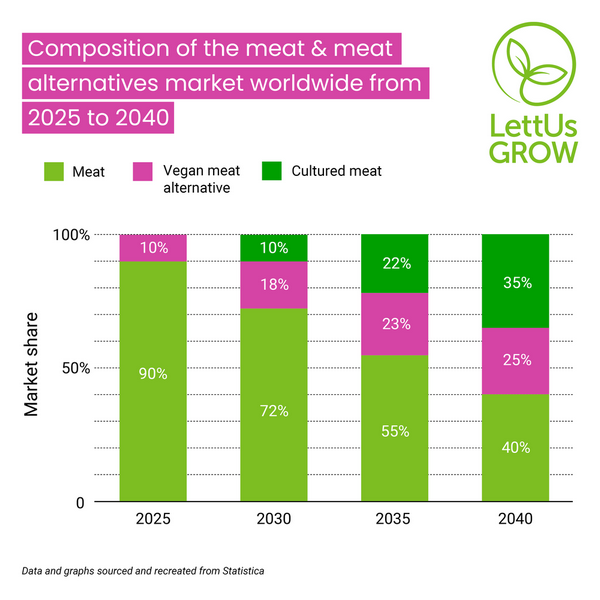 Propagating using aeroponics can often produce larger and healthier crops which could be more likely to survive transplanting into soil. LettUs Grow is currently exploring this with crops such as tomatoes and tree whips, but there is the potential that plants used as alternative proteins, such as soy, pea, amaranth, chickpea, rapeseed, water lentil, and lupin, might also benefit from being propagated in this way.

Biofortification
There are some health concerns surrounding fake meat - especially when they're replacing meat as part of a vegan diet. These processed foods can often be perceived as "healthier" simply because they are associated with being "plant-based." But though they are often higher in salt, studies have found that typically they have a higher nutrient performance, or there is no difference, to the foods they are replacing - it all depends on what is being added.

However, there are specific micronutrients that are more difficult to get using plant-based ingredients, such as iron. CEA offers the opportunity to grow biofortified foods in order to provide specific nutrients and make these vitamins or minerals more easily digestible. This could be done in many ways, including through genetics, with breeding (though this can take an extraordinarily long time), or through gene editing, to alter the nutritional composition of the crops.

At LettUs Grow, we have also begun work to see how we can impact the nutritional composition of crops by optimizing the environmental conditions: using aeroponic irrigation systems to deliver specific nutrients to the crops during the growth stage in order to increase the concentration of the specified nutrients or vitamins in foods. In doing so, it might be possible to increase the nutritional value of alternative proteins and deliver vitamins or minerals that might otherwise only be found in animal products.

Circular thinking
Another concept that is under-explored is how we can join together different production methods to create a more circular food system. This can help to reduce physical waste and loss of resources, such as energy, in our supply chains.

Since both the alternative protein and vertical farming sectors are in their infancy, there could be an opportunity for circular thinking principles to be included in earlier design phases. For example, this could allow systems such as insect farms, aquaculture, and plant growth to be linked to make use of waste streams from one process to another.

The future of protein alternatives
Our food system is broken. The main problem with introducing alternative foods into our supply chains is that this doesn't automatically fix any systematic issues. If we want to offer these alternatives, we must make sure that the processes creating them are not damaging. Only by looking at our food systems as a whole will we create real, lasting change. Otherwise, we risk replacing one problem with another. This will include introducing alternative proteins but also making improvements to the animal farming industry.

New agricultural technologies, such as vertical farming and aeroponics, can certainly help to support the growth of alternative proteins, but it cannot be considered a quick fix to the deeply embedded and nuanced issues surrounding eating meat. Yet it is exciting to begin to imagine how CEA might be able to support and make a reality of innovative solutions to our food system issues - we're just at the beginning!