"Dry-fog is the next generation of aeroponics"

Lite+Fog, a Berlin-based company, started focusing on dry-fog systems as they noticed many benefits from it. "Dry-fog is the next generation of aeroponics. I started working on indoor farms for more than ten years. Because I did a lot of mushroom farming, I began to work with dry-fog and realized that it is a great way to feed plants. So we are now able to ultimately reduce the typical costs of Vertical Farming by around 80% and even triple the energy efficiency", states Martin Peter, Co-founder, and CEO of Lite+Fog.

Lite+Fog can replace heavy steel racks with unique fabric, which separates the root zone from the growing zone and allows farmers to grow with any substrate. "The system is a realization of work that originally started with urban farming projects, where I built many prototypes and tested a lot of approaches, especially vertical column-based farming technologies. The system as we plan it right now, however, has been developed over the last year."

Efficiency
There is a lot of interest from farmers based in Israel, India, and the UK, all with different purposes. Compared to other systems, the Lite+Fog system dramatically reduces the costs in production, maintenance, and labour. The company is planning to have a pilot farm constructed by next year. "We are still on the lookout for potential pilot partners, strategic investors and research institutes which are interested in joining this new generation of Vertical Farming. Bringing the efficiency up and lowering the costs is the most important thing to transform this vital technology into the mass-market application it has to be", says Martin.

Standardized farms
"We want to become a core technology supplier for indoor farms. As the technique has proven to be successful, we are now upscaling, and engineering the larger versions of our prototype farms. So we're connecting with suppliers and core industries in Germany and elsewhere, to create an important industrial network, able to satisfy the demand we expect in the future.

We plan on delivering at least 60 bigger farms per year during the next five years. Very simply put, we create a big box where seeds enter at one end and plants come out at the other. Eventually, we want to focus on standardizing these farms, as this would significantly improve cost efficiency and comparability. These are both essential factors for research and marketability", Martin states. 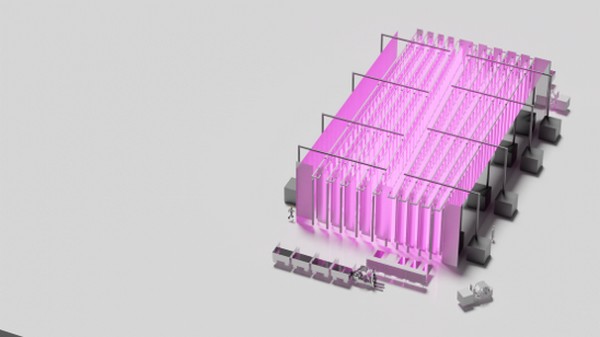 The concept design of Lite+Fog's 1000m2 footprint farm creating more than 45.000 m2 of growing surface for greens and berries

Benefits
"Dry-fog enables plants to be better nourished and improves growth by up to 20%. This way of growing is also practically weightless, so you can completely reimagine the architecture of farms - which we make great use of. Improving the efficiency of indoor farms is about how many square meters of growing space you generate in a given volume. Our approach is focusing on that primarily.

In addition to that, with no clogging nozzles, less maintenance, and easier central production, dry-fog is the next step of indoor farming. And that's why we are so much more cost-efficient than other approaches which are not vertical but multilayer horizontal farms anyway. We develop a true vertical "food-reactor".

The state-of-the-art spray nozzles typically used in vertical farms, which directly spray water on the plant roots, are bound to clog up as they are using a salty solution. These now outdated systems need to be cleaned and maintained all the time - and are reliably unreliable in the long run. However, dry-fog does barely weigh anything, doesn't need nozzles, and is therefore much cheaper and easy to use. "

Challenges
However, "fogponics" also has its challenges. As there is no growing medium, you have to be extra aware of the temperature of the root zone and on the complex system delivering the fog to the roots. Also, the droplet size has to be adjusted for bigger nutrients that are essential for some crops. But "these 'difficulties' can easily be mitigated if you adapt a bit - and that's what we are researching currently," says Martin.