“We always had the vision to alleviate the labor stress,” says Christopher Weis Thomasen, co-founder and CEO of Seasony. Starting in 2018 with a 40m2 farm based in Copenhagen, multiple things were tested as the team wasn’t much home in plant science. Eventually, the heavy labor in the farm was highlighted. The Danish tech company provides robots that are built for vertical farms.

App-controlled robot
Eventually, the company decided to focus on a robotic solution, a mobile robot named Watney. This is some sort of scissor lift as it has some of the same functionalities. The robot drives around by itself, with no need for infrastructure and installation and is able to handle all transport of plants and trays to and from the systems. After first receiving the robot, one person has to walk next to it with an iPad, to map out all routes in the vertical farm.

“It’s like a self-driving car. You’ll be able to tell the robot where to go and what to move around in the farm,” Christopher notes. The sensors are safety rated for being amongst people and set at a specific safety level. Once it gets too close to anything it simply shuts off.

Watney is very adaptable as it can be tailored to any need of a farmer. Either cameras or robotic arms can be applied to the device, serving different needs. “As an example, we recently started a partnership with Organifarms as we’re on the same development track. We want to fit their robot on top of ours as a robotic harvester in the farm,” Christopher notes.

Once all the work is done for the day, lifting or taking out trays at every plant level, the extra battery life of the robot will be transmitted into extra operation time. It will drive to every plant level, monitoring crops by taking photos of each level and take local sensor readings.

Watney in action (Click here to zoom on the photo)

Reducing costs
According to Christopher, applying robots to work is very important for financial sustainability, as labor can account for upwards of 50% of OpEx in a vertical farm. “At an MVP (Minimum Viable Product) level, it can do everything we want it to do. Now we’re testing everything with customers and we’re working on finetuning the design.

Christopher adds, “Building ecosystem partners such as Organifarms, is a large first step for us. We see lots of farms that are looking into strawberry production so it really made sense for us to focus here as well.” The company is looking to expand this portfolio of partners to be able to serve all kinds of needs within, harvesting of fruits and berries, pollinating, pruning, etc. “We want to be the best platform for automation with a deeply rooted focus on controlled environment agriculture.

Besides gaining a quick ROI, it also increases data collection heavily as well. “Being able to track everything is so important to improve your production and traceability because you’re basically tracking everything the robots are doing and why not utilize the long production hours in robotics to gather valuable image and environmental data from everywhere in the farm,” adds Christopher. 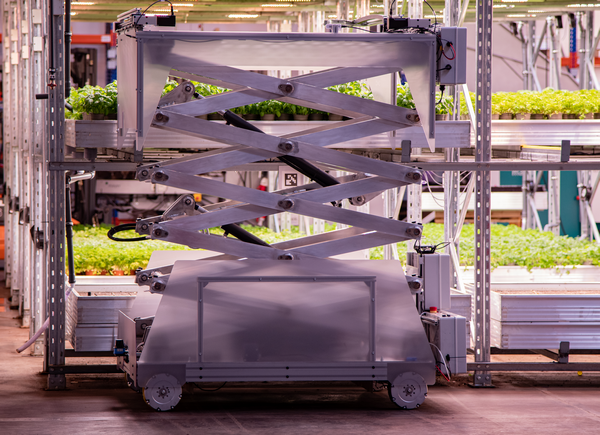 Moving into logistics
Seeding and harvesting can easily be automated. But in terms of logistics, it has to make sense in terms of your farm size, explains Christopher. “The smallest farms obviously will not need a robot-like ours. Seasony’s solution is applicable to larger and medium-sized farms. Often, logistics are the forgotten costs in vertical farming in terms of labor. It takes a huge amount of time to have people work from a scissor- or a forklift. When having robots to relieve the hard work, monitor and analyze data at the same time, it’s a very efficient way of working.

When adjusting these robots to a farm, it’s very easy to scale up. Vertical farmers are learning as they grow. The next farm is always a little different according to Christopher, so something flexible is needed as a solution. “The warehouse industry made the move to mobile robots, and vertical farming will benefit by doing the same,” he notes.

Piloting with partners
Christopher explains that they’re going into a partnership with Kaya Herbs, a Danish herb producer. They have a 1400m2 farm, whereas they’re moving into a much bigger setup, increasing software and automation. Therefore, Seasony and Kaya Herbs have signed an agreement to test the robot during a 14-day trial and to continue developing new projects within software and automation together. 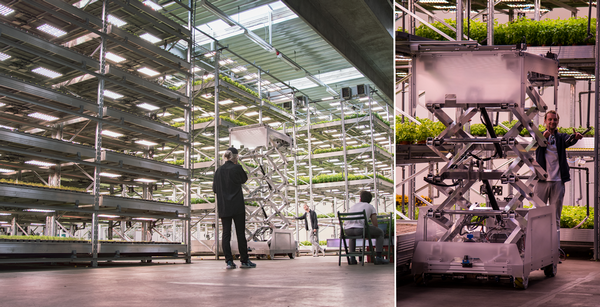 The pilot at Kaya Herbs

The first half of the trial is used for the setup, whereas the second week will be used for testing. There’s also a showcasing day to show the robot operations to all stakeholders and potential investors. There’s no need for infrastructure for the robot as it drives itself using lidars and cameras, which feeds into an intelligent navigation system. The robots will also be able to integrate into farm management systems to give farm operators the best user experience, explains Christopher.