The many lighting aspects of a vertical farm

“Plants can really have a nice life on a vertical farm.” That’s the belief of Professor Leo Marcelis, Chair Horticulture and Product Physiology at Wageningen University. But to give those plants the best possible life in a vertical farm, a lot of optimization is needed in terms of lighting and environmental conditions, as he explained during a presentation at the Vertical Farming Conference. 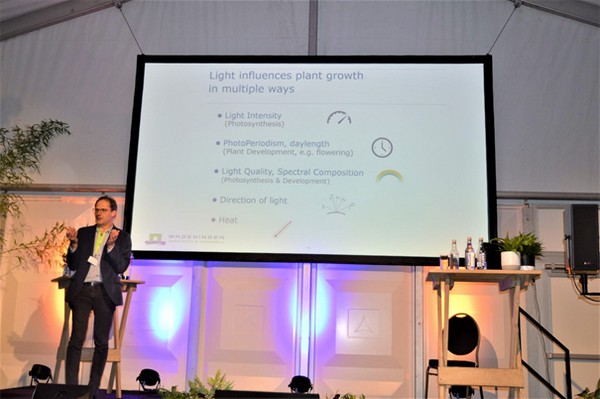 Color
Leo then goes a bit deeper into some aspects of light, starting with color. “The plant has a number of photoreceptors, sort of the eyes of the plant.” The most well-known of the photoreceptors are UVR8, perceiving UV light, a type of light that is not usually used in vertical farms. Then there are the blue light receptors, the cryptochromes, and the phytochrome family of receptors, which receive a red light and far-red light. “Those photoreceptors have a profound impact on many processes in the plant.”

Far-red light
Leo focuses in his talk on far-red light, light between 700 and 800 nanometers, which is not used in many vertical farms so far. “It is hardly visible to the human eye, and not considered to be photosynthetic-active.” However, it does affect the plant; far-red light makes the plant elongate more, and causes the leaf area to expand.

“This expansion in leaf area is particularly important in young plants. In the end, a plant only grows because of light – if it absorbs the light. If the light is not absorbed by a leaf, it may fall on the floor and is lost. In young plants, we often see a lot of light falling on the floor, so there it’s very important to stimulate the leaf area. Far-red can help with that.”

Because plants are more sensitive to far-red light during sunset, it could make sense to give it just a little bit of far-red light at that time of day – even 15 minutes is enough to show an effect.

Far-red light also affects the distribution of assimilates throughout the plant organs. It reduces root growth in lettuce, and in tomatoes, it has been found that adding far-red light led to a 45% increase in the dry mass in the fruits. “That was mainly due to a change in the ratio between vegetative and generative growth. With far-red light, we can move more assimilates towards the fruits.” So far-red light provides a tool for growers to balance the vegetative-generative ratio.

Light duration
The duration of light also makes a difference. Leo points to an experiment in which tomato plants were grown at 12 hours of light, 15 hours, or 18 hours. “Going from 12 hours to 15 hours, you get 20% yield increase. A similar increase in light from 15 to 18 hours led to an increase of only 8%.” This shows that a longer day length leads to more yield, but the efficiency will go down as the duration of light increases.

“So if you want to improve the efficiency of the lamps, you can’t always use the maximum amount of light.” In tomato plants, then, it is not advisable to have the light on 24 hours a day. Other crops, such as rocket, could do well under such a lighting regime though.

Shelf life
It is not just about yield, however, as quality is equally important. According to Leo, in a vertical farm one should initially focus on growth, and during the last five to seven days on quality. When focusing on quality it is visible not just on the farm, but also after harvest. In an experiment, lettuce grown under high-intensity light still remained fresh two weeks after harvest, while other leaves already started to wither.

“So the shelf life also very much depends on the light intensity. With more light in lettuce, we get more sugars in the leaves. We also get more vitamin C. Those two together make that the shelf life increases.”

Light – one part of the equation
Leo concludes: “There are endless opportunities with light, but it doesn’t make sense to optimize the light if we don’t see that in combination with all the other growth factors in the vertical farm: temperature, CO2, air humidity, airflow, indeed, from macroclimate to microclimate, what’s in the root medium, the water, the nutrients.”