Future Farm and Groots, two young companies poised to change the landscape of the food industry, have joined forces to create a new generation of ready-to-eat salads. Made with the well-being of people and the planet in mind, the varieties offered jointly by the two brands include Caesar and Pasta&Tvna. In addition, these salads are one step closer to Zero Waste as they feature edible cutlery from the startup Voilà.

Groots grows and sells food from a sustainable production system based on vertical farming, which allows growing anywhere, anytime. This formula achieves 50 times greater cultivation capacity per square meter, avoiding deforestation and soil pollution, in addition to reducing water consumption by 94%, among other benefits for the environment. 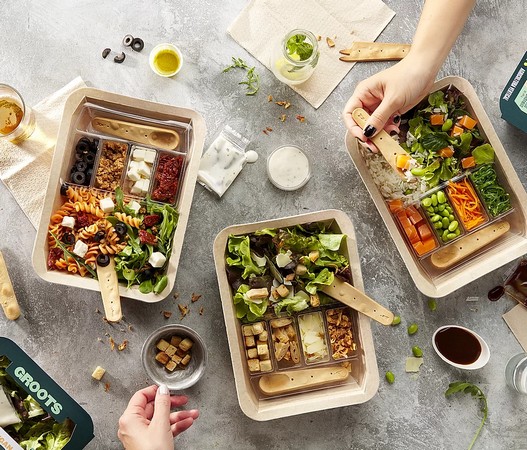 "At Groots, we're not content with changing the rules of the game in the agricultural world. So far, we have promoted a new way of growing, a new way of working based on inclusion and social impact, and we have encouraged consumers to grow their own urban gardens, but we didn't want to stop there. We wanted to go further and reach the table with a ready-to-eat product," explains Carlos Gómez, Co-Founder of Groots.

Future Farm, on the other hand, is a company that has revolutionized the way people eat by using natural and non-GMO ingredients so as to offer healthier and environmentally friendly alternatives for minced meat, meatballs, chicken strips, sausages, and tuna. The latter product, made from soybeans, peas, and chickpeas, was recently recognized at the Alimentaria food fair with the Innoval Award.

The best flavor is always available
The new line of salads born from the union of Groots and Future Farm responds to the standards of those who are conscious of their diet, whether they are flexitarians or choose to maintain a vegetarian or vegan diet. At the same time, it satisfies the expectations of the most gourmet palates that are concerned about their health and the future of the planet yet do not want to give up the best taste.

More and more people are choosing to incorporate their values and vital commitments into their diet, reducing the consumption of meat and products coming from unsustainable sources. "Veggie" diets have increased in the Spanish population by 27% in the last two years, according to the international consultancy Lantern. 0.5% of consumers surveyed declared themselves vegan, 1.5% vegetarian, and 7.9% flexitarian, a new category which, although it does not renounce 100% meat and fish consumption, does limit it in percentage (no more than 10%) and in origin (products of organic origin).

For all these people and for those who continue to maintain an omnivorous diet but are concerned about their health and the planet's health, Groots x Future Farm salads are a convenient, practical, and very tasty option to eat with the same guarantees as a freshly homemade salad, but without putting in the slightest effort.