"How betting the farm, and losing it, taught me an invaluable lessons in CEA"

"There is a lot of talk in the news about CEA operations, indoor farms, vertical farms, and even greenhouse operations closing their doors, facing economic uncertainty, and generally not living up to expectations–particularly investor expectations. NYC AgTech Week even hosted a panel discussion titled "Failed Farms." While stories of failed farms in the emerging indoor, high-tech produce industry are garnering quite a bit of attention, the cannabis side of the business is experiencing similar issues," shares Mark Doherty, COO of Dual Draft.

As someone with first-hand experience designing, building, operating, and closing a market-leading indoor farming operation, Mark wants to share his story. Specifically, he wants to shed light on the causes of failure for Aqua Vita Farms and his market observations over the past ten years since he opened (then closed) his first foray into CEA.

Aqua Vita Farms was founded in 2010. A first-of-its-kind Indoor Aquaponic Farm located in a 14,000-square-foot warehouse at a former silverware manufacturing company in Upstate New York. With over 7,000 square feet of deep water culture hydroponic systems fed by 4 - 5,000 gallon fish tanks and the necessary filtration systems, Aqua Vita grew lettuce, basil, and other herbs for restaurants and small markets in a 100-mile radius, selling through distribution partnerships with produce wholesalers. 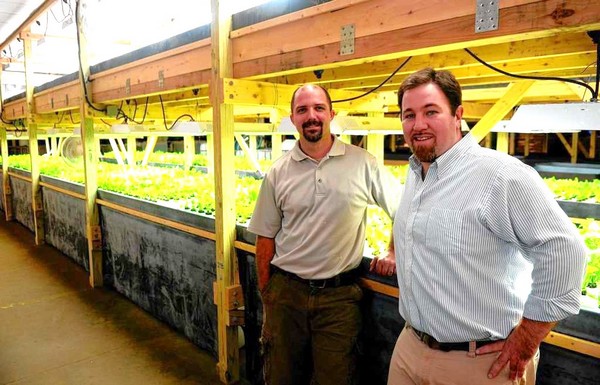 How it all went
Mark's investment of $250,000 a year into operations was augmented by an angel investment of another $250,000. He developed a business plan, recruited a trusted engineer and aquaculturist, and brought on contractors and electricians to help build the facility. Right off the bat, it became clear the technology they had chosen for biofiltration was inadequate.

The team spent what working capital they had to address this issue and rebuild those systems. Sales were ramping up at that time, so they hoped that they would be able to cash flow through. But not long after, they developed an infestation of aphids, which resulted in reducing the yield capacity by 50%. After a months-long struggle with this issue, the company ran out of cash and out of time and had no choice but to shut down. Evaluating
"Looking back, I now see clearly the mistakes I made. First, I didn't value the difficulty of farming heavily enough. Sure, I did a lot of research. I spoke with a lot of farmers of all varieties. And I thought I understood. But I began my journey looking at the farm from a technology and business standpoint. And as someone who had never grown commercially, I didn't know what I didn't know. I really couldn't comprehend just how hard it would be to keep plants healthy and vigorous, so they produce on a commercial scale. Until it was too late," Mark affirms.

Secondly, Mark thought technology or methodology could overcome all of the challenges he was facing. It was 2009, Mark was finishing his MBA and had just read Dickson Despommier's The Vertical Farm. He believed that new product investments and process improvements alone would be enough. However, the design of Mark's facility was flawed. The location he chose, the building itself, its layout and ergonomics, and the equipment selected early on didn't set me up for success. Yet, the mistakes made early on proved to be too costly.

Finally, Mark was only as strong as my network–which at the time wasn't very strong. He struggled to find people with the experience needed to build and successfully run this type of operation.

"While I was able to speak with several professors at noted universities and some operators of small greenhouses producing leafy greens and vegetables, none had the depth of experience bringing a business like mine to scale in the market conditions of the time. This may have hurt me the most."

"Reflecting has its place, sure. But I prefer to look ahead. And as I do so, I have some advice for those entering or struggling in this industry–an industry I believe in." Final advice to growers?
To conclude, Mark would like to share the following with growers that are facing similar issues.

First, do not undervalue the extreme difficulty of commercial farming at scale. This work is challenging, the investments needed to survive and thrive are great, and success is not guaranteed. Entering the industry requires an honest acknowledgment of this.

Second, while technology has an immense capacity to solve problems, it alone cannot overcome the inherent challenges of farming. It's important to get your footprint and processes right from the beginning and to fix problems immediately when you identify them. Flawed designs will hamstring even the most experienced farmers.

Finally, make and keep smart friends. "I'm constantly in awe of how often entrants to the market forgo reaching out to those who have gone before them. Let go of what you think you know. Ask for help. And above all, be teachable. Your learning curve will surely be shorter than mine, and hopefully, your path to success will be less costly."