With the "ambitious goals, a great founding team, a viable business model with broad application scenarios, and their approach to a social problem," Organifarms convinced the jury, as Fabian Sacharowitz explained on behalf of the experts. 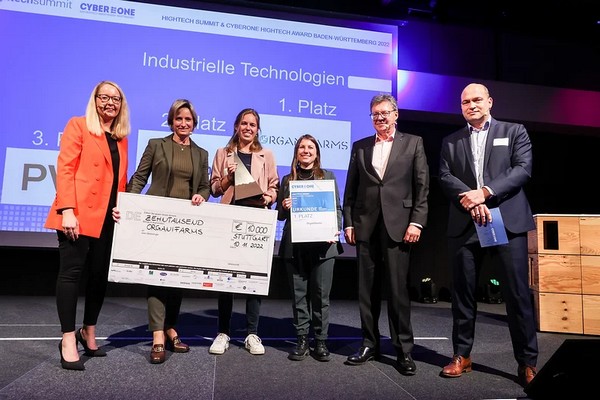 Kathrin Günther, Chairwoman of the Board of bwcon e.V., and Dr. Nicole Hoffmeister-Kraut, Minister of Economics, Labor and Tourism of the State of Baden-Württemberg, also attended the award ceremony. She emphasized, above all, that young companies boost the state's economy and drive innovation with their short communication and development paths.

"We are very honored to receive this award and the trust in Organi-farms," said Hannah Brown, CCO and Co-Founder at Organifarms, "We are happy that our efforts to address global challenges in agriculture are also gaining regional attention and winning over the expert jury." 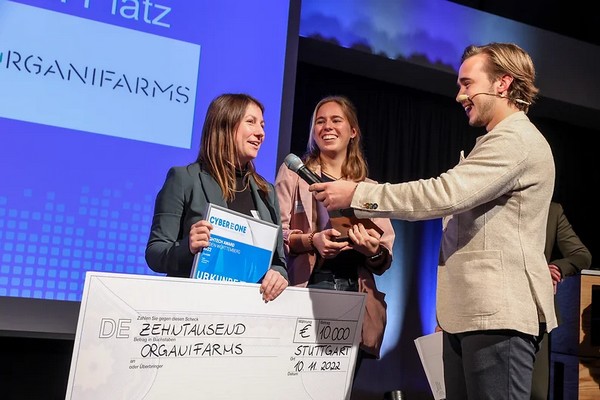 CCO & Co-Founder Hannah Brown thanks the team and jury for their trust and support on stage. Picture: bwcon

The annual award ceremony marks the top of the Hightech Summit, where experts discuss how the future of the industry can be actively shaped. This year, the focus was particularly on digitalization, the mentality in companies, and the 25th anniversary of bwcon. "For us, the right mindset was a big component in the makeup of our team," said Hannah Brown, CCO, and Co-Founder at Organifarms, in a panel discussion.

The anniversary, as well as the award win, was also congratulated by the founding members of the association.

Bwcon annually awards the CyberOne Hightech Award to technology-oriented startups in three categories whose business plan and business model particularly impress the jury. This year, the prize was awarded for the 24th time - in addition to Organifarms, the startups "Medical values" and "Bauta" also received the Cyberone Hightech Award in the categories Life Science and Health Care as well as ICT, Media, and Creative Industries. The prize is endowed with 10,000€.